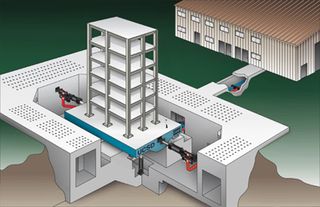 On Nov. 6, Oklahoma experienced its biggest earthquake ever: a magnitude 5.6 temblor centered near the small town of Sparks. Fortunately, the damage was minimal — only 14 buildings and a few roads will need minor repairs — but the event, as well as the earthquake that surprised the East Coast in August, was another reminder that sizable quakes can strike many parts of the United States, not just the Pacific Coast.

In California, regulations require that buildings be constructed to withstand significant ground motion. In light of the recent quakes, should the rest of the country abide by similar guidelines?

According to Tim Reinhold, senior vice president for research and chief engineer at the Insurance Institute for Business & Home Safety, the United States already has a suggested building code that makes provisions for all types of natural disasters. The code details the construction standards needed to prevent building collapse during earthquakes of various severity, and it recommends which standards be adopted in each region based on what size earthquake that region can expect in the next 500 years.

The national model code recommends stringent designs for structures in California, Alaska, Hawaii and the New Madrid Seismic Zone centered in Missouri, but calls for only "minimal changes from conventional construction" in regions such as Oklahoma that experience minor earthquakes, Reinhold said. [What's the Largest Earthquake that Could Strike the United States?]

States' rights dominate when it comes to these seismic safety regulations. "It's up to the states to see if they want to actually adopt the national model codes," Reinhold told Life's Little Mysteries, a sister site to LiveScience. "Some states don't adopt a statewide building code but instead they leave it up to counties to decide."

The county governments are also responsible for enforcing these codes, and the fees for building permits pay local building inspectors' salaries.

The traditionally more-conservative states tend to shy away from regulation, Reinhold said. "Missouri, for example, has a state law that prohibits a statewide building code. If you go to Houston, Texas, they've got an earthquake building code, but you don't have to follow it if you don't want insurance. So the regulation is much weaker and not uniform across the state at all."

Reinhold's trade group, which is based in Tampa, Fla., recommends that states adopt building codes. "We push very hard for statewide building codes because it develops more uniformity across the state and provides a better level of protections to all citizens," Reinhold said. "There are real advantages to people in the state, and also to manufacturers and builders, because they don't see one standard here and another there."