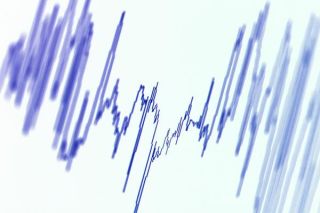 Several earthquakes struck the United States Friday (Oct. 22), including a 4.0-magnitude quake near San Francisco, Calif., a 4.8-magnitude temblor in central Texas, and a 3.2-magnitude quake in Hawaii. Though experts say the small burst of seismic activity on U.S. soil isn't all that unusual, it has likely led some people to wonder how much worse things could get.

Extremely powerful earthquakes could happen in two places in the United States, scientists say: the Pacific Northwest and Alaska.

Geophysicists estimate that the Cascadia Subduction Zone, an intersection of tectonic plates just off the northwestern coast that stretches from the northern tip of California up to Canada, is capable of generating an earthquake with a magnitude as high as a 9.0.

The last time the area shook that hard was 300 years ago. "There were hardly any people living on the Pacific Northwest Coast in 1700," said Heidi Houston, a seismologist at the University of Washington's Department of Earth & Space Sciences. "But it generated a huge tsunami that traveled to Japan and destroyed coastal villages there. The Japanese records show that the causative earthquake could only be our Cascadia Subduction Zone and it had to have been a magnitude-9.0."

By analyzing sedimentary deposits in low-lying areas along the coast, paleoseismologists have determined that large tsunamis (almost definitely produced by large earthquakes) strike the Pacific Northwest about every 500 years, give or take 200 years. Because the last one happened in 1700, "that means sometime in the next 400 years it will happen again," Houston told Life's Little Mysteries.

Scientists aren't able to provide a more specific time frame than that. They know what conditions must be present in an area to lead to massive earthquakes, but, according to Nathan Bangs, a geophysicist at the University of Texas, "it's hard to do useful predictions."

"The low-lying areas have deposits that give a record of repeated history of tsunami inundations, and how big they were. That means you may know the likelihood on the order of hundreds of years, but it doesn't give the likelihood in the next few years," Bangs explained.

A 9.0 earthquake is also possible in Alaska, the most earthquake-prone state in the U.S. In 1964, the Aleutian fault separating the Pacific and North American plates ruptured near the city of Anchorage, resulting in a 9.2-magnitude earthquake – the second largest ever recorded on a seismograph.

The San Andreas Fault, commonly perceived to be more dangerous than the Cascadia Fault because of the proximity of several major California coastal cities including San Francisco, is not actually capable of generating a 9.0-magnitude earthquake. "The biggest one there would be just under 8.0," said Houston.