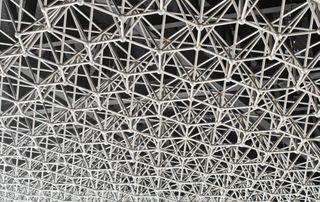 Structural engineers design the frameworks of buildings, such as this stainless steel truss roof of a gymnasium, to make sure they can withstand stress and environmental conditions.
(Image: © niceregionpics | Shutterstock )

Structural engineering — a specialty within the field of civil engineering — focuses on the framework of structures, and on designing those structures to withstand the stresses and pressures of their environment and remain safe, stable and secure throughout their use. In other words, structural engineers make sure that buildings don't fall down and bridges don't collapse.

Structural engineering is among the oldest types of engineering, dating back to the first instance of tree branches being lashed together with vines to make a shelter. Throughout recorded history, people have been designing and building increasingly larger and more sophisticated structures, from primitive huts to the International Space Station.

The names of the earliest practitioners of structural engineering are lost to antiquity. We will never know who designed the Hanging Gardens of Babylon, the Parthenon or the aqueducts of the Roman Empire. Some of the latter-day practitioners in this field are known, although often not as well as the structures they designed. Prominent structural engineers include Gustave Eiffel (Eiffel Tower, Statue of Liberty) and Eero Saarinen (Gateway Arch). However, most designs for famous modern structures such as the Large Hadron Collider and the James Webb Space Telescope are attributed to companies and government organizations.

What does a structural engineer do?

Structures must be able to deal with the conditions in which they are built. A house in Canada must have a roof that can bear the weight of heavy snow and a stadium in California must be able to withstand earthquakes, for example. When building bridges, designers must take into account the conditions of terrain, wind, water and traffic volume. Structural engineers consider all of these factors and provide technical advice about the project.

According to MyMajors.com, a structural engineer's job includes:

Critical skills that a person needs in structural engineering include an in-depth understanding of physics and mathematics. A structural engineer must also know the properties of various materials, such as their density, hardness, tensile strength, bulk modulus and bending strength. They need to be able to calculate how different materials will perform under stresses such as compression, tension, bending and twisting, as well as under various environmental conditions of temperature, pressure, corrosive gases and liquids, and even radiation. They also need to be able to predict how these materials will perform over an extended period of time.

Structural engineers rely increasingly on computer-aided design (CAD) systems, so proficiency with computers is essential. In addition to speeding up the drafting process, CAD systems allow for quick and easy modifications of designs and three-dimensional (3D) visualization of finished parts and assemblies.

Most structural-engineering jobs require at least a bachelor’s degree in engineering. Many employers, particularly those that offer engineering consulting services, also require certification as a professional engineer. A master’s degree is often required for promotion to management, and ongoing education and training are needed to keep up with advances in technology, materials, computer hardware and software and government regulations. Additionally, many structural engineers belong to the Structural Engineering Institute of the American Society of Civil Engineers.

The future of structural engineering

The U.S. Bureau of Labor Statistics (BLS) states that employment of civil engineers (there is no separate information about structural engineers) is projected to grow 20 percent from 2012 to 2022. There should be opportunities for highly qualified applicants, particularly those who have kept abreast of the latest developments in technology. Having good grades from a highly rated institution should give a job seeker an advantage over the competition.