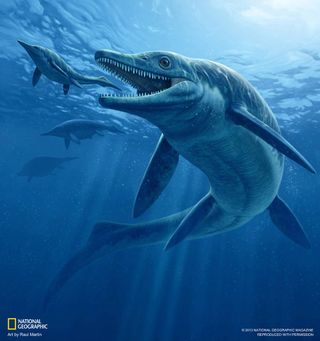 The giant ichthyosaur ruled the oceans some 244 million years ago. Here's what it may have looked like seizing a meaty snack.
(Image: © Art by Raul Martin, © 2013 National Geographic Magazine, Reproduced with permission (ONE-TIME USE))

Newfound fossils of a giant dolphin-shaped reptilian predator are now shedding light on how the world recovered after the most devastating mass extinction in history, researchers say.

This prehistoric sea monster could provide information on how the planet might deal with the mass extinction humans are causing now, scientists added.

The giant marine predator was at least 28 feet (8.6 meters) long, fossils showed. The carnivore was recovered over a course of three weeks in 2008 from what is today a mountain range in central Nevada, and is now kept at the Field Museum in Chicago.

This new species, formally named Thalattoarchon saurophagis — which means "lizard-eating ruler of the sea" — was an early member of the ichthyosaurs, marine reptiles that evolved from land reptiles just as modern whales did from land mammals. Ichthyosaurs cruised the oceans for 160 million years, apparently going extinct about 90 million years ago, some 25 million years before the age of dinosaurs ended.

"They were the most highly adapted of all marine reptiles, acquiring a fishlike shape and giving birth to live young," said researcher Martin Sander, an evolutionary biologist at the University of Bonn in Germany.

Thalattoarchon possessed a massive skull and jaws armed with large teeth with cutting edges used to seize and slice prey. The researchers say it probably could have tackled victims as large as itself or larger. [See Images of the Prehistoric Sea Monster]

"Our new carnivorous ichthyosaur was a top predator, meaning that it had the same role as killer whales in the sea and Tyrannosaurus or the big cats of today on land," Sander said. "This is the first predator in a long row of predators down to this day. The players have changed, but not the game."

Most of the animal was preserved, including the skull — except the front of the snout — parts of the fins, and the complete vertebral column up to the tip of the tail. The fossil was christened "Jim" after its discoverer, Jim Holstein, of the Field Museum.

The newfound carnivore apparently lived 244 million years ago, just 8 million years after the greatest mass extinction in Earth's history, a die-off at the end of the Permian period that killed as many as 80 to 96 percent of all ocean species. Relatively small species were the main survivors.

"Our 'Jim' was thus the first in a long row of T. rexes of the sea, which is why we named him Thalattoarchon, 'ruler of the seas,'" Sander said.

The fact that a giant predator capable of tackling similarly large prey arose so soon after the end-Permian mass extinction reveals that ecosystems recovered rapidly after the die-off.

"A top predator is a very good indicator that the ecosystem was complete, because if the highest level in the food web is there, the lower levels must have been there as well. Otherwise it won't work," Sander said.

Ichthyosaurs diversified very rapidly. "We hope that by studying this group we can better understand the processes of evolution at the grand scale," researcher Lars Schmitz, an evolutionary biologist at Claremont McKenna College, told LiveScience.

The finding could give scientists a sense of what's to come of Earth in the future.

"Ecosystem recovery has been a big topic of research for a while, partially because we as humans are causing one of the biggest extinctions right now," Sander said. "People thus have a keen interest in knowing how long it takes to rebuild things once you have destroyed them."

The scientists, who were supported by the National Geographic Society, detailed their findings online today (Jan. 7) in the journal Proceedings of the National Academy of Sciences.

Editor's Note: This article was updated to state the sea monster lived 8 million years after the end-Permian extinction.