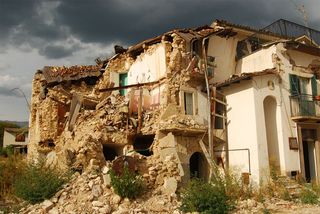 A view of destruction caused by the terrible earthquake in the village of Onna in Aquila, Italy.
(Image: © Franco Volpato | Shutterstock)

SAN FRANCISCO — After six Italian scientists were sentenced to six years in prison for failing to warn the public of a devastating 2009 earthquake, experts are rethinking how they communicate risk.

The magnitude-6.3 earthquake hit the town of L'Aquila, Italy, on April 6, 2009, killing 309 people. A week prior to the quake, city officials had made reassuring statements that downplayed the risk, according to prosecutors, of a major quake linked to a series of smaller tremors. Prosecutors argued that the seismologists' risk analysis was flawed and that the statements made by city officials convinced residents not to evacuate, costing lives.

The group "got snookered into answering a simple yes or no question: Will we be hit by a large earthquake?" said Thomas Jordan, a researcher at the Southern California Research Center at the University of Southern California. "Seismologists can't provide an answer to that type of question."

The scientific community has been frightened by the possibility that seismologists could face criminal charges for failing to predict an earthquake — even though there's no way to truly forecast a temblor. [See Photos of L'Aquila Earthquake Destruction]

But the L'Aquila events have also forced hazard experts to reassess how they discuss risk with the public. For instance, scientists should actually state the numerical odds of a catastrophe striking, not rely on qualitative descriptions like "low chance," Jordan told LiveScience.

Prior to the quake, the quaint medieval town of L'Aquila had experienced a swarm of temblors. But in a press conference a week before the main earthquake, a city official (who was not a seismologist) said "the scientific community tells me there is no danger because there is an ongoing discharge of energy," reported Nature News.

That statement, which most experts think is not scientifically accurate, may have kept people from evacuating the town. The statement was a key part of the prosecution's argument that city officials and scientists were guilty of manslaughter, said Max Wyss, the director of the World Agency of Planetary Monitoring and Earthquake Risk Reduction.

So how should scientists communicate the odds of a cataclysmic event?

In 2008, Jordan and colleagues conducted a study that assessed the disaster protocols in six major countries known to have a lot of seismic activity. None of the countries had a formalized process to calculate earthquake probability and describe it to the public, he said.

It's also important to compare the odds of an infrequent disaster with everyday risks that people are familiar with, such as a hurricane for people in the Caribbean, said Stephen Sparks, a volcanologist at the University of Bristol. People should also be told how much the odds of an earthquake or volcanic eruption have risen relative to the baseline, or normal seismicity in that area, he said.

But beyond that, seismologists need to convey the uncertainty in those estimates of probability, Jordan said.

"You actually have to deal with probabilities of probabilities," Jordan said. "That can be a technically difficult conversation."

Even though most people aren't math whizzes, they have a decent estimate of risk probability as long as it's described well, he said. For instance, in a survey Jordan conducted, Californians knew they faced fairly high odds of seeing a major earthquake, and that the state's southern region faces greater risk than Northern California, he said.

At the end of the day, public officials should have a set of protocols in place that use these estimates of risk, elevated activity and uncertainty to make their evacuation calls.