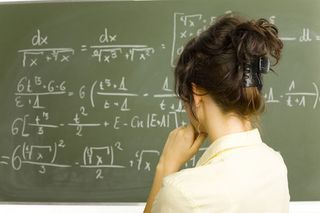 Worrying about a math test can quite literally hurt. The anticipation of doing math problems lights up pain networks in the brain for people with high levels of math anxiety, according to a new study.

The participants then were given a series of word and math problems while a functional magnetic resonance imaging (fMRI) machine measured their neural activity. Before each problem, a yellow circle or blue square would pop up on the screen for a few seconds to indicate whether a math task or word task was coming up next.

While staring at the visual cue that signaled a math problem was on deck, the HMAs experienced a rush of activity in parts of the brain associated with pain perception, including the dorso-posterior insula and mid-cingulate cortex, the brain scans showed. And the higher their rating of math anxiety, the more such neural activity in their brain increased, the researchers found. Meanwhile, no such pattern was observed in those with low math anxiety.

Researchers have previously found that psychologically stressful events, including romantic breakups and social rejection, can cause physical sensations of pain. The new study suggests that simply anticipating a stressful event can cause actual pain as well.

"Given our findings were specific to cue-activity, it is not that math itself hurts; rather, merely the anticipation of math is painful," the researchers wrote.

The HMAs did not seem to experience pain while actually working on the math problems (though they did perform worse on the difficult math problems than the difficult word problems). The researchers say their study could explain why those with high math anxiety tend to avoid math classes and certain career paths.

The study, led by psychology researcher Ian Lyons of the University of Chicago, was published online Oct. 31 in the journal PLoS ONE.