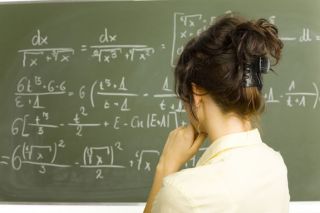 There's a name for the sweaty palms and feelings of dread a certain subject can induce in its students: Mathematics anxiety.

The classroom fears associated with it may become self-fulfilling; some research has shown that mathematics anxiety hurts performance in math. What's more, it is known to prevent its sufferers from continuing their math education and pursuing careers that require quantitative skills.

A new English study has found that girls suffer from mathematics anxiety more than boys, confirming some previous research. The analysis also found that high math anxiety was a stronger predictor of poor test performance for girls than boys.

But in spite of the sex differences in math anxiety, the researchers saw no difference in the girls' overall performance in math, as compared with the boys'.

"These results might suggest that girls may have had the potential to perform better than boys in mathematics, however, their performance may have been attenuated by higher levels of (mathematics anxiety)," the research team from the University of Cambridge and the University of Oxford write online today (July 9) in the journal Behavioral and Brain Functions.

To better understand the implications of math anxiety, the researchers looked at tests and questionnaires from 4,333 English secondary school children (in their early to midteens).  Some have considered math anxiety a part of another misery familiar to students: test anxiety. In this study, the researchers assessed test anxiety and controlled for it to see if it factored into the results.

They found that test anxiety was also linked to poor mathematics performance, but this link was stronger for girls than boys.

While many, but not all, previous studies indicate girls suffer from higher mathematics anxiety than boys, it is not clear why.

Researchers have offered many speculative reasons for this difference: that it arises from sex roles that assign math to the male domain; that girls may be more willing to admit feelings of anxiety or may be more critical of themselves than boys; that boys have greater self confidence; and that past experience with mathematics is responsible, the researchers write.