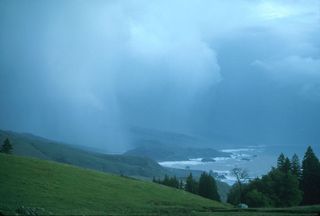 A storm darkens the sky at the mouth of the Russian River, north of Bodega Bay, Calif. NOAA scientists and colleagues are installing the first of four permanent "atmospheric river observatories" in California this month, to better monitor and predict the impacts of powerful winter storms associated with atmospheric rivers.
(Image: © NOAA.)

SAN FRANCISCO — Nature generally doesn't time its storms so well. A "Pineapple Express" weather system — so named because of its origins near the pineapple-rich Hawaiian Islands — dumped large amounts of rain on San Francisco and Northern California this past weekend, just ahead of the announcement of a new system for forecasting and assessing exactly that type of storm.

These storms, aptly and more technically known as atmospheric rivers, bring huge amounts of moisture across the Pacific. They are narrow bands in the atmosphere that funnel moisture from the tropics into more northerly latitudes. Over the course of several days, or even longer, the moisture in the system is dropped on a wide area and can potentially cause flooding and reservoir overflow, as has happened in some West Coast communities with the current system. That system also brought strong, hurricane-force winds to some regions and dozens of inches of snow to others.

The installation of the first of a set of four instrument arrays to monitor these storm systems was announced by National Oceanic and Atmospheric Administration and other researchers here yesterday (Dec. 3) at the annual meeting of the American Geophysical Union during a two-day lull in the weather. More rain is expected today, and watches and warnings for floods, winter weather and high winds are in effect.

"It turns out that atmospheric rivers are the cause of most of the floods in the Western coastal states, much like we've seen just in the last few days," said F. Martin Ralph, of the NOAA Earth System Research Laboratory, at a news conference announcing the installation. [The World's Weirdest Weather]

Even with only about 20 percent of the water vapor in a system being released, an average of six to 10 atmospheric rivers each winter provide about 25 to 50 percent of all the rain in a given year in some areas. The Pineapple Express that has hit the area in recent days already dumped more than 15 inches (38 centimeters) of rain on some parts of California, according to NOAA, and left more than 35,000 without power.

The potential for flooding with Pineapple Express storms is clearly enormous, so forecasting the systems and exactly what the impacts from them will be is crucial. The new network of sensors actually includes about 100 sites, three-quarters of which are already installed. These include soil moisture sensors — to help forecast whether or not the ground will be able to accept more water when a storm arrives — and sensors that measure total water vapor in the air, along with the four new radar systems that will be placed along the coast to monitor for atmospheric river conditions. These sites, the first of which will be installed at Bodega Bay in Northern California later this month, will measure at what altitude in the storm the precipitation turns from snow to rain.

That "snow line" can have major implications on the ground: If the snow turns to rain higher up, that means that mountainous regions will get rain instead of snow, which yields a higher likelihood of heavy runoff and thus flooding.

Forecasters can then use these other vital bits of data to improve forecasting abilities; if one storm yielded certain snow lines and rain totals, the models can use that information to improve forecasting of the next storm. It will also help forecast starting and ending times of atmospheric river conditions, which can play a big role in decision-making surrounding dams and reservoirs when flooding occurs. [Weird Weather: One Strange Quiz]

Those attempts to measure and forecast impact, rather than details of the storm itself, are really the main goal of the sensors.

"This network is really tuned toward setting us up to do that, to improve our ability to forecast what a particular storm will mean in terms of floods," said Michael Dettinger, a research hydrologist at the U.S. Geological Survey.

The sensor network will cost about $11 million in total, and the other three main observatory sites — separated from each other along the West Coast by about 155 miles (250 kilometers), will be installed over the next 18 months or so.

Dettinger pointed out that Pineapple Expresses may also be feeling the effects of climate change. It is difficult to say exactly how warming will affect them, however; the systems will likely carry more moisture, but winds could also slacken and push less of that water on to land. Still, he said, climate change "is likely to add in a few megastorms, if you will, of a scale that we may not have encountered historically."