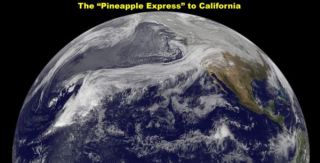 A so-called river in the sky has triggered severe storms across Southern California since Dec. 16, with potentially record-setting rainfall on the way for the rest of the week.

The bearer of bad weather is what's called a "Pineapple Express," which in satellite images looks like a "river of moisture in the atmosphere," said Kevin Trenberth, a climatologist with the National Center for Atmospheric Research in Boulder, Colo.

This weather system has brought storms that are among the worst in a decade for the region. Governor Arnold Schwarzenegger has declared a state of emergency in half a dozen Southern California counties and the torrential rainfall has prompted evacuations, caused mudslides that halted a commuter rail line, and caused flooding at Laguna Beach, reported the Los Angeles Times. [Related: Severe Weather Reports Come to Twitter .]

The Pineapple Express brought 9.8 inches (25 centimeters) of rain to parts of California over the past few days, and dumped 13 feet (4 meters) of snow in the Sierra Nevada Mountains of California.

The Pineapple Express is a 4,350-mile-long (7,000 kilometers) jet of wet air that runs from Hawaii to California. The jet picks up moisture in the subtropics, which it can then dump on Southern California.