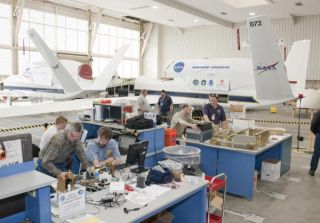 Atmospheric scientists check out their instruments in a hangar at NASA Dryden Flight Research Center prior to installation aboard one of NASA's two Global Hawk aircraft for the Global Hawk Pacific environmental science mission.
(Image: © NASA.)

Unmanned drones are set to fly high in the atmosphere to study so-called rivers in the sky, similar to the so-called Pineapple Express that brought torrential rains and flooding to Southern California in December.

These atmospheric rivers are streams of air that bring moisture to the Pacific Coast and other places. In one day, an average atmospheric river transports an amount of water vapor equivalent to a foot of liquid water covering an area about the size of Maryland.

Scientists from the U.S. National Oceanic and Atmospheric Administration (NOAA) will fly unmanned aircraft into these weird weather systems during the Winter Storms and Pacific Atmospheric Rivers (WISPAR) initiative beginning today (Feb. 11). The research seeks to improve our understanding of how atmospheric rivers form and behave, and to see how unmanned aircraft do in investigating these phenomena.

Only a portion of the water vapor in an atmospheric river is transformed into rain or snow. About 20 to 40 percent of the water vapor in one atmospheric river crossing Northern California makes it to the surface. They can still be dangerous, however, and could trigger flooding , wind and even mudslides in California that could exceed damages brought on by Hurricane Katrina in 2005, according to a recent study.

Results from WISPAR could improve winter storm forecasts. The scientists hope that offshore monitoring of atmospheric rivers could one day become a reality.

"We need to know more so we can better predict the exact timing, location and amounts of precipitation," said Marty Ralph, of NOAA's Earth System Research Laboratory in Boulder, Colo. "Although we have been studying atmospheric rivers since 2003, there are still things to be learned about the fate of atmospheric rivers in a changing climate, such as do they get stronger or weaker, do they occur more or less frequently?"

Scientists will fly NASA's Global Hawk drone, which will be equipped with sensors, including an advanced water vapor sensor and new dropsonde instruments that will be launched from Global Hawk to take temperature, wind and other readings as they descend through atmospheric rivers. The Global Hawk was also used to take measurements from inside hurricanes during this past hurricane season.

Global Hawk can fly for more than 24 hours straight at high and low altitudes that could be dangerous for humans.

NOAA researchers are also installing an instrument network across California that will help monitor atmospheric rivers as they strike the coast and move inland.