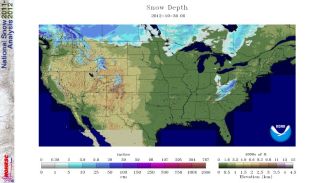 Sandy just won't quit. The hurricane-turned-post-tropical-cyclone blew through the Caribbean last week, killing at least 69 people, most of them in Haiti and Cuba. Sandy then churned up the U.S. East Coast, making landfall last night (Oct. 29) in New Jersey and bringing massive floods to Atlantic City, Manhattan, and other coastal areas.

And now Sandy is a snowstorm.

Thanks to a collision with cold air flowing from the Arctic, the post-tropical storm (so called because it has moved out of tropical latitudes), has so far dumped 26 inches (66 centimeters) of snow on Redhouse, Md., 24 inches (61 cm) in Alpine Lake, W. Va., and 18 inches (46 cm) in Newfound Gap, Tenn., according to The Weather Channel's Mike Bettes.

The National Weather Service (NWS) has issued blizzard warnings for high-elevation areas of the central Appalachians, and a swath of lower elevation areas from western Maryland southwest into eastern Tennessee and western North Carolina are under winter storm warnings and advisories. Sandy's remnants could drop up to 3 feet (0.9 meters) of snow in parts of West Virginia and up to 2 feet (0.6 m) in southwestern Virginia and eastern Kentucky before moving into Canada on Wednesday, according to the NWS. [On the Ground: Hurricane Sandy in Images]

The transformation of Sandy from rainstorm to snowstorm is a consequence of a blast of Arctic air that has fed the storm even as it has moved out of tropical waters. Normally, a tropical storm like Sandy would weaken as it moves northward into cooler waters. But a dip in the polar jet stream has fueled the storm, prompting some to call it a "nor'eastercane," a combination of hurricane and nor'easter. Nor'easters are storms driven by frigid polar air. (The moniker "Frankenstorm" also stems from this weather mash-up.)

This polar air on Sandy's western side is turning rain to snow — a situation that's not entirely unprecedented. According to the Washington Post's Capital Weather Gang, a "snowicane" hit upstate New York and New England in 1804, and 1962's Hurricane Ginny dumped snow in Maine. In 2005, the Category 5 storm Wilma fed into a nor'easter that dropped up to 20 inches (50 cm) of snow in West Virginia and New England.