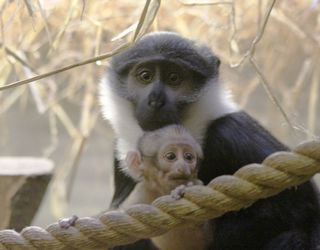 There's a new arrival at the Edinburgh Zoo, a baby L'Hoest's monkey.

At three weeks old, the baby is still clinging to mom Tumbili, who has been a natural at rearing her young, according to a zoo statement. The newborn is the second baby of Tumbili and her mate, Kizizi, who were introduced in 2010.

The zoo also hosts another pair of L'Hoest's monkeys, which are native to the Democratic Republic of Congo, Rwanda and Uganda.

"As a group they are extremely close and have a great dynamic together," said primate keeper Lorna Hughes. "They all seem to be interested in the new born baby, however, mum Tumbili is still extremely protective so it will be a while before he or she meets the rest of the group."

The zoo keepers won't be able to tell if the baby is male or female, or give it a name, until it starts venturing away from mom, which won't happen for awhile, the zoo statement said.

"It's always exciting to see the babies grow and take their first few swings through the enclosure," Hughes said in the statement.

Adult L'Hoest's monkeys typically weigh between 9 to 18 pounds (4 and 8 kilograms). These primates are endangered in the wild due to deforestation of their habitat and people hunting them for bushmeat.