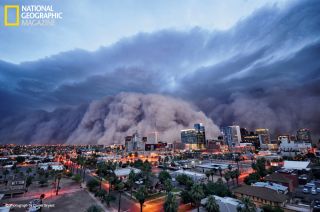 If it seems like the weather has been all kinds of crazy in your corner of the world in recent years, you probably aren't just imagining things.

So says the September 2012 edition of National Geographic Magazine. The storied publication takes a hard look at the extreme weather events that have at times frozen, baked or drowned various parts of the world over the last several years.

In a cover story titled "Weather Gone Wild," the magazine offers firsthand accounts of the devastating floods that hit Nashville in 2011, stories of prolonged droughts in Texas, and a laundry list of other weather disasters across the globe.

"What's going on?" writes author Peter Miller. "Are these extreme events signals of a dangerous, human-made shift in Earth's climate? Or are we just going through a natural stretch of bad luck? The short answer is: probably both."

The story is accompanied by a gallery of stunning photos of the extreme weather, such as a shot of a towering dust storm engulfing Phoenix and an up-close image of a tornado tearing across a landscape.

Miller explains some of the large-scale climatic players behind the recent spate of extreme weather, such as El Niño and La Niña, but also points to global warming as a factor.

This year the United States has certainly seen its fair share of extreme weather.

And although that storm certainly dropped huge amounts of rain, it's not clear whether the sudden downpours will cure the extreme drought that has gripped the Midwest.

In the face of some scary statistics about the cost — both in lives and in dollars — of extreme weather, Miller holds out some hope for the future. He writes that if humans rein in fossil fuel use to slow the pace of global warming, and make intelligent choices about where to build, extreme weather doesn't have to take such a heavy toll.