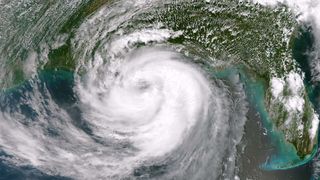 At 1:35pm CDT on August 28, 2012 the recently launched Suomi NPP satellite flew over Isaac, capturing this image of the storm with the true color capability of the VIIRS sensor.
(Image: © Data courtesy of the NOAA/NASA Suomi NPP satellite)

Hurricane Isaac is pummeling the Gulf Coast, lashing the area with punishing wind, rain and floods, and because the storm is moving slowly, beleaguered residents can't expect much relief anytime soon, forecasters say.

The storm is creeping northwestward at about 6 mph (9 kph), and is likely to maintain a similar pace for the next 24 to 48 hours, said Tim Schott, a meteorologist at National Weather Service headquarters in Silver Spring, Md.

"It is a slow mover," Schott told OurAmazingPlanet. "Although I don't think it will set any records," he added.

Hurricane Isaac made landfall on the evening of Aug. 28 near the mouth of the Mississippi River as a Category 1 storm packing winds of 80 mph (130 kph).

The hurricane is stuck in a kind of upper-atmospheric doldrums. It's beyond the pull of any large-scale wind patterns, such as the jet stream, so it's plodding along slowly. Once it moves farther inland, toward the middle of the country — jet-stream territory, Schott said — Hurricane Isaac will begin to pick up the pace.

"In general, that is the case," he said. "As [storms] move north, they tend to accelerate." Once they get within reach of the jet stream, they start to speed up.

Hurricanes also typically slow their forward motion a bit once they move over land, and Isaac was no exception. Out over the ocean, the storm was moving at a clip of 14 or 15 mph (22 or 24 kph), but since making landfall, the hurricane has cut its speed by more than half.

As Hurricane Isaac moves northward and picks up speed, it will also weaken. The storms lose steam once they move away from warm ocean waters, which serve as a fuel source.

Adding to the woes of those in its path, Hurricane Isaac is a big storm. (The sheer size of a storm doesn't influence its speed, but it does mean it tends to hammer a wide area.)

"So you take the slow movement and large size of the storm, and people will be impacted for many, many hours," Schott said.

He said the storm is a sobering reminder that a Category 1 hurricane, though the lowest on the Saffir-Simpson Hurricane Scale, can have devastating effects.