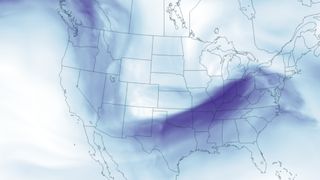 The low-dipping jet stream behind the March 2, 2012, outbreak. This image shows the wind speed at 18,000 feet in the atmosphere. The darkest shade represents winds of up to 150 mph.
(Image: © NOAA)

A low-dipping jet stream is partly behind today's outbreak of severe weather, which has already seen several damaging tornadoes.

The massive storm system that spawned deadly tornadoes on Leap Day is continuing to hammer large sections of the country today (March 2). The low-slung jet stream that is fueling these storms is clearly seen in the above image of wind speed at 18,000 feet (500 millibars) in the atmosphere, taken from output from the U.S. National Oceanic and Atmospheric Administration's (NOAA) North American Model for March 2 at 7 p.m. EST.

The jet stream is bringing cold air from Canada to mix with warm, moist air from the Gulf of Mexico. Where these two differing air masses meet is often an area of severe weather, hail, winds and even tornadoes.

Those conditions came together earlier this week with disasterous results. From Feb. 28 into Feb. 29, the Storm Prediction Center received reports of 36 tornadoes. The tornadoes included a strong EF-4 twister in Harrisburg, Ill., a rarity for February. At least 13 people died during the severe weather.

Already today, tornadoes have struck near Huntsville, Ala., and Chattanooga, Tenn., with severe damage reported.  The Strom Prediction Center today has already recieved 118 reports of severe weather, including 17 reported tornadoes. Weather experts continue to warn that dangerous tornado outbreaks could explode throughout today and overnight across the Mid and Deep South and Ohio River Valley.