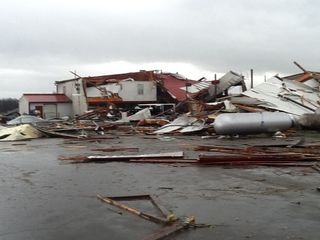 The storm that struck Harrisburg, Ill., was part of a big outbreak across the Midwest. Storms also hit western Kentucky, seen above.
(Image: © NWS)

The Leap Day tornado that struck Harrisburg, Ill., killing at least six, was rated as one of the strongest on the tornado damage scale — a rarity for February.

Harrisburg is a community of about 10,000 in southeast Illinois. National Weather Service (NWS) experts said the tornado that destroyed much of the town had winds of up to 170 mph (274 kph). At 4:56 a.m. CST (5:56 a.m. EST), the storm struck under the cover of darkness — common for winter tornadoes — and killed at least six people, according to the NWS. The twister traveled at least 7 miles (11.2 kilometers) on the ground and some 200 homes were heavily damaged or destroyed.

Rescue, recovery and storm damage survey operations are still under way, so these figures could change, the NWS said.

From Tuesday into Wednesday, the Storm Prediction Center received reports of 36 tornadoes. Several tornadoes have been rated EF-2 on the tornado damage scale, including the destructive twister that hit the entertainment district inBranson, Mo. Nebraska saw its first February tornado in recorded history this week.

Since 2000, just a handful of EF-4 strength twisters have struck in February, according to data from the National Climatic Data Center. Such monster storms need a steady supply of warm, soupy air from the Gulf of Mexico, which isn't as common in winter.

During last year's record-breaking year for twisters, 17 twisters were rated EF-4, many of them striking during the deadly April outbreak across Alabama, Mississippi and Tennessee.

The Storm Prediction Center said severe thunderstorms and tornadoes are possible again today (March 1) in many of the same areas where tornadoes were reported Wednesday. The risk area then grows for Friday, when storms could be more intense, forecasters said.