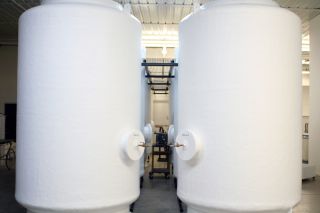 A 23-year-old woman who is not expected to live out the year has decided she'd like to be cryogenically frozen when she dies, and she's turned to Reddit for help.

Kim Suozzi, who has an inoperable brain tumor, made a post on Reddit a few weeks ago that explained her bleak prognosis and asked members to help her "find some peace in dying young." Adhering to the social networking site's code of ethics for lengthy posts, she concluded with a bolded one-line recap for short attention spans: "I want to be cryogenically preserved when I die from brain cancer but can't afford it. I am literally begging for financial help."

Within 24 hours, she had hit $2,100, and her cause soon caught the notice of the Society For Venturism, a group of cryonics boosters that ran a background check and set up a tax-deductible charity. At last update, they had raised her $27,000.

So it seems very likely that Suozzi will exceed her minimum goal of $30,000, the money it will cost her to become a member of the Cryonics Institute (CI) in Clinton Township, Mich., and ensure that her body arrives there upon her death. But when she stops breathing, whenever that happens, what will the Internet's goodwill actually have paid for?

In large part, it will go toward having liquid nitrogen in Suozzi's holding chamber refreshed indefinitely on a once-a-week basis by someone like Andy Zawacki, a member of CI who has been working for the nonprofit organization since 1985 and aids in the cryopreservation of what CI calls "patients."

Ideally, according to Zawacki, the preparations for freezing a new admission to CI begin as soon as possible after the patient's heart stops beating. If a patient has paid the necessary extra fees (though at around $90,000, they still seem out of reach for Suozzi), Suspended Animation Inc., a subcontractor of CI, will try to have technicians waiting by his or her bedside at the time of legal death to begin cooling the body and replacing blood with an organ preservation solution. [What Exactly Do They Do During an Autopsy?]

Whether or not a patient has arranged for these "standby" services, he or she will eventually be put on ice and transported to CI, where Zawacki says a funeral director will swap out whatever water remains in the body for an in-house "cryoprotecant" solution.

"It's biological antifreeze," he told Life's Little Mysteries. "It draws the moisture out of the tissue. It solidifies when it gets down to about minus 130 degrees Celsius [minus 202 degrees Fahrenheit], but it doesn't form ice crystals, which cause ruptures in the cells."

After the solution has hardened into a smooth, glass-like material inside the body, the patient is gradually cooled to the boiling point of liquid nitrogen, or minus 320.8 F (minus 196 C), and then taken, in a sleeping bag, to be stored in a chamber of liquid nitrogen indefinitely. New arrivals share one of 13 chambers with some of their 112 neighbors at the institute.

Though a group of 61 scientists signed an open letterin 2008 asserting that "cryonics is a legitimate science-based endeavor," so far only about 250 deceased people worldwide elected to have the procedure (CI currently has 473 members signed up to be preserved upon their deaths), according to CI.

Along with reversing whatever condition led to a person's death in the first place, a resuscitation attempt would have to contend with harms caused by the toxicity of the cryoprotectant solution and damage from freezing or oxygen deprivation that hadn't been prevented.

Having weighed the evidence, Suozzi still thinks cryopreservation is worth a shot: "I am aware of the problems with the current state of cryonics, but I have the hope that technology might come up with a solution in the future. No one knows what technology will be available in 50 years. Yes, it takes 'faith' in technology, but it takes faith to assume that technology won't be sufficient to reverse these problems someday."