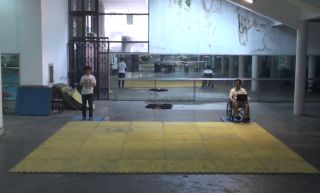 If a human thinks a command, a flying drone will obey. A Chinese team has shown how to control a quadrotor robot using brain signals alone as a futuristic twist on the saying, "Look ma, no hands!"

The researchers from Zhejiang University used a commercial electroencephalography (EEG) headset to interpret brain signals as commands for the hovering drone, according to New Scientist. They released a video showing how a man in a wheelchair can tell the drone where to go — a taste of what they will present at the Ubiquitous Computing Conference in September.

Sample commands include moving the drone forward by thinking "right," or turning it clockwise by thinking "left." The human user can even blink both eyes to tell the drone to snap a picture.

Such quadrotors have already shown impressive swarm tactics and coordination in aerial ballets ranging from playing the "007" theme from James Bond films to putting on dazzling laser light shows. A futuristic  quadrotor has even featured in a video game ad that later inspired the U.S. military to begin thinking about building such robots.

The Chinese researchers first envision using the mind-controlled drones to empower disabled people or hold friendly aerial battles between drones. But it's not hard to imagine a more refined version of the technology that could possibly allow soldiers to order around a swarm of much smarter drones on future battlefields.