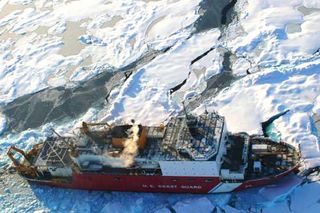 Scientists are setting sail this week for frigid Arctic waters, for an expedition to one of the least-explored ocean regions on Earth.

The four-week trip, led by the U.S. Geological Survey, is designed to investigate the toll ocean acidification is taking in the Arctic Ocean, a region that appears to be particularly susceptible to its effects.

Ocean acidification is a big concern in all the world's oceans. However, since the gas that triggers it — carbon dioxide, which is pumped into the atmosphere by the burning of fossil fuels — is absorbed more readily by cold waters, acidification is an even bigger concern in the Arctic.

Ocean acidification interferes with the ability of marine organisms to build hard shells of calcium carbonate, USGS director Marcia McNutt said in a statement. That means acidification has a punishing effect on corals, oysters, crabs, shrimp and plankton — virtually anything that builds a hard shell or exoskeleton.

"Comparatively more research has been devoted to the tropics, where coral reefs are threatened," McNutt said. "This important expedition focuses on polar latitudes, where the acidification effects can cascade from microscopic organisms up to our economy, as the organisms at risk form the base of the food chain for some of the world's most productive fisheries."

The expedition departs tomorrow (Aug. 25) aboard the U.S. Coast Guard Cutter Healy. Researchers plan to collect thousands of samples of water and ice.

Oceans currently absorb about one-fourth of the carbon dioxide from the atmosphere, and as CO2 levels rise, so, too, will ocean acidity.