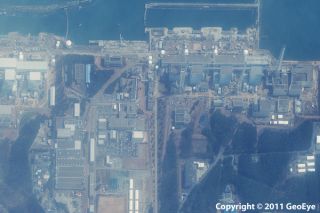 Residents near the Fukushima Daiichi nuclear power plant in Japan may have been spared the brunt of the deadly radiation that spewed from the failed reactors in March 2011, according to a study appearing tomorrow (Aug. 15) in the Journal of the American Medical Association.

Doctors from Tokyo University measured levels of radioactive cesium, a measure of radiation exposure, in nearly 10,000 children and adults living in Minamisoma, a city just 14 miles (23 kilometers) north of the Fukushima Daiichi plant. They found the residents' exposure to be minimal, equivalent on average to less than half of a chest X-ray.

The study is hopeful news for the millions of Japanese in the Fukushima area, although their lives and livelihoods have been forever tainted by the catastrophe.

The earthquake and tsunami that struck Japan on March 11, 2011, took more than 15,000 lives and devastated the Tohoku region in north central Japan. Hundreds of thousands of buildings were destroyed and nearly a half million people were displaced. [In Pictures: Japan Earthquake & Tsunami]

The tsunami knocked out the Fukushima Daiichi nuclear power plant, ultimately causing a meltdown in three of its reactors. Deadly radiation soon blew across the region. Residents within a 12-mile (19 km) ring around the plant — including most in Minamisoma — were evacuated. Worrisome levels of radiation were found in the region's water and soil during the subsequent months.

As horrific as the events were, few if any people have died from the radiation exposure. Deaths thus far have been attributed to the earthquake and tsunami and hospital evacuations.

The study reported in JAMA is the first to measure radiation exposure in humans after the nuclear accident, the Tokyo researchers said.

Like others in the region, many residents of Minamisoma returned to their homes a few months after the accident to try to rebuild their lives. The city had been hit hard by the tsunami itself; hundreds of homes were washed away, and hundreds of people had died.

In September 2011 researchers began to enroll nearly a quarter of the city's population in a study to measure levels of two types of radioactive cesium isotopes: cesium-134 and cesium-137, with half-lives of two years and 30 years, respectively. (A half-life is the time it takes for half of the radioactive material to decay.) These isotopes are representative of total nuclear radiation exposure, the researchers said.

Only about a third of the residents studied had detectable levels of cesium, and this included about 16 percent of the children and 38 percent of adults. The radiation dose for nearly all participants was less than 1 millisievert, a level considered safe for the public. Only one person had a higher level, and that was 1.07 mSv. For reference, a CT scan of the head is about 1.5 mSv.

So while at least one city in the affected area dodged the bullet, the Japanese aren't yet completely safe from radiation contamination.

"I don't think most people will experience long-term health problems related to the nuclear accident if we can keep providing safe and uncontaminated food to the residents," Masaharu Tsubokura, first author on the report, told LiveScience. "In Chernobyl, residents nearby the nuclear plant were still exposed to radiation even decades after the incident because of the intake of the contaminated food. Food control is the key issue in lowering internal contamination."

Japan will have to continue monitoring for food contamination for decades, Tsubokura said. The researchers added that this glimmer of good news about low radiation exposure must be viewed in the full scope of the disaster, where most residents in the area have suffered a great emotional and financial burden.

Christopher Wanjek is the author of a new novel, "Hey, Einstein!," a comical nature-versus-nurture tale about raising clones of Albert Einstein in less-than-ideal settings. His column, Bad Medicine, appears regularly on LiveScience.