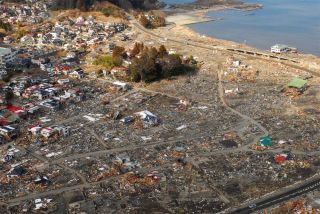 An aerial view of damage to Sukuiso, Japan, a week after the earthquake and subsequent tsunami devastated the area in March, 2011.
(Image: © Dylan McCord. U.S. Navy)

Radioactive material from the Fukushima nuclear disaster has been found in tiny sea creatures and ocean water some 186 miles (300 kilometers) off the coast of Japan, revealing the extent of the release and the direction pollutants might take in a future environmental disaster.

In some places, the researchers from Woods Hole Oceanographic Institution (WHOI) discovered cesium radiation hundreds to thousands of times higher than would be expected naturally, with ocean eddies and larger currents both guiding the "radioactive debris" and concentrating it.

With these results, detailed today (April 2) in the journal Proceedings of the National Academy of Sciences, the team estimates it will take at least a year or two for the radioactive material released at Fukushima to get across the Pacific Ocean. And that information is useful when looking at all the other pollutants and debris released as a result of the tsunami that destroyed towns up and down the eastern coast of Japan.

"We saw a telephone pole," study leader Ken Buesseler, a marine chemist and oceanographer at WHOI, told LiveScience. "There were lots of chemical plants. A lot of stuff got washed into the ocean." [Japan Nuclear Radiation Shows Up in US (Infographic)]

The Tohoku earthquake and tsunami of March 11, 2011, led to large releases of radioactive elements from the Fukushima Dai-ichi power plants into the Pacific Ocean. To find out how that radiation spread in the waters off Japan, in June researchers released "drifters" — small monitoring devices that move with the current and take measurements of the surrounding water.

The drifters are tracked via GPS, showing the direction of currents over a period of about five months. Meanwhile, the team also took samples of zooplankton (tiny floating animals) and fish, measuring the concentration of radioactive cesium in the water.

Small amounts of radioactive cesium-137, which takes about 30 years for half the material to decay (called its half-life), would be expected in the water, largely left over from atmospheric nuclear tests in the 1960s and the Chernobyl accident in 1986. But the expedition scientists found nearly equal parts of both cesium-137 and cesium-134, which has a half-life of only two years. Any "naturally" occurring cesium-134 would be long gone.

Naturally, the oceans hold about 1-2 becquerels (Bq) of radioactivity per cubic meter of water, where a becquerel is one decay per second. The researchers found hundreds to thousands of times more, with up to 3,900 Bq per cubic meter in areas closer to the shore, and 325 Bq in sites as far as 372 miles (600 km) away.

Ocean phenomena, big and small, also affected the radiation spread. For instance, the team found that the Kuroshio Current, which runs roughly east-northeast from the south of Japan toward the Aleutians, acts as a kind of boundary for the spread of radioactive material, even as it also pushes a lot of it away from the coast. In addition, eddy currents that arise at the edge of the Kuroshio caused the cesium and other radioactive pollutants to reach higher concentrations in some places closer to the coast, carrying some of the drifters toward populated areas south of Fukushima.

"It's [an] interesting thing to think about, as the concentrations vary by a factor of 3,000," Buesseler said. "With what we knew about transport prior to this work, you wouldn't know why it is so different."

The team also looked at the amounts of cesium isotopes in the local sea life, including zooplankton, copepods (tiny crustaceans), shrimp and fish. They found both cesium-137 and cesium-134 in the animals, sometimes at concentrations hundreds of times that of the surrounding water. Average radioactivity was about 10 to 15 Bq per kilogram, depending on whether it was zooplankton or fish (concentrations were lowest in the fish). [Image Gallery: Freaky Fish]

Even so, Buesseler said, the radioactivity levels are still below what is allowed in food in Japan, which is 500 Bq per kilogram of "wet" weight. And while cesium was present in the fish, it doesn't accumulate up the food chain the way polychlorinated biphenyls (PCBs) or mercury do. Mercury and PCBs tend to stay in an animal's tissues for long periods, so when a tuna eats smaller fish, it takes in all the chemicals those small fish have eaten. Cesium tends to be excreted from animals much faster.

The WHOI expedition calculated that some 1.9 petabecquerels — or 1.9 million billion becquerels total — were in the stretch of ocean studied. The total released by the Fukushima accident was much greater, but a lot of the radionuclides were dispersed by the time of the sampling in June.

The researchers also found silver-110, but it wasn't clear that was from the Fukushima plant. Another set of experiments measured strontium-90 levels, but that work hasn't been published yet.

Kara Lavender Law, an oceanographer at the Sea Education Association, noted this kind of work is important because the picture of how ocean currents affect environmental pollutants isn't always clear. "From an ocean-current standpoint we know what large-scale circulation is like, but when you get into where contaminant spills will end up, sometimes the picture is a whole lot different when you look at smaller areas," Law told LiveScience.