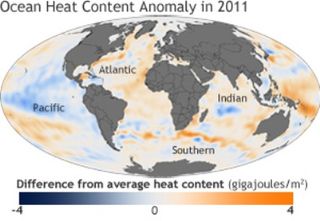 La Niña chilled the eastern tropical Pacific in 2011, but ocean heat content nearly everywhere else was above the long-term average.
(Image: © NOAA)

While cooler than the year prior, 2011 was still one of the 15 hottest since 1880, a report released today (July 10) by the National Oceanic and Atmospheric Administration has found.

The annual report, which examines a wide variety of climatic and weather data from around the world, saw a number of worrying trends continue from previous years and, along with a separate study, established connections between extreme weather events in 2011 and both a warming climate and a persistent La Niña pattern.

The researchers who contributed to the studies said that 2011 wasn't a one-off year for weird weather, instead it is what we are likely to see more of in a warming world.

The first report noted that the total area of the Arctic Ocean covered by sea ice in both the summer and winter was the second smallest on record; the area covered by ice has been below historical averages since 2001.

Concentrations of greenhouse gases like carbon dioxide, nitrous oxide and methane continued to rise, according to the report, which was produced by hundreds of scientists from around the world and published online today in the Bulletin of the American Meteorological Society. [Video: Earth's Warming Since 1880]

Warming in the Arctic was especially pronounced, and the area is warming about twice as fast as areas closer to the equator, the report found. On the other side of the Earth, the South Pole station recorded its all-time highest temperature of 9.9 degrees Fahrenheit (minus 12 degrees Celsius) on Dec. 25, breaking the previous record by more than 2 degrees F (1 degree C). Levels of Arctic ozone, which block UV rays, dipped to their lowest since records began in 1979.

The report also examined the year's extreme weather. Part of the weirdness arose from back-to-back cool spells in the Pacific Ocean, called La Niña episodes. La Niña, Spanish for "the girl," is a cyclical system of trade winds that cools the waters of the equatorial Pacific (El Niño is La Niña's warm-water counterpart).

La Niña helped drive heavy snowfall in the northern United States in early 2011, historic droughts in the southern United States in summer and an above average Atlantic hurricane season. It also played a role in record flooding in South America and Australia, which killed thousands of people, as well as a drought in east Africa that affected millions, said Thomas Karl, director of NOAA's National Climatic Data Center, in a teleconference.

The La Niña system waned in the spring, before strengthening in the second half of the year. This weakening is blamed for some of the destructive tornadoes in the South in spring 2011. Warming temperatures in the Pacific allowed the jet stream to go rogue, driving winds into the heart of the United States, where cool and warm air masses collided, creating the thunderstorms that spawned killer tornadoes.

A separate study released at the same time examined a number of 2011's extreme events, and compared the likelihood of such events happening now to years past. This study found that the heat wave that struck Texas was about 20 times more likely to occur in a La Niña year now, as opposed to 50 years ago, said study author Peter Stott, a climatologist with the United Kingdom Met Office. The increased likelihood of heat waves is a result of a warmer world, he said.

Taken as a whole, the report and study show the globe continuing to warm, and suggest it will continue to do so, said Martin Jeffries, a researcher at the University of Alaska-Fairbanks.

"2011 will be remembered as a year of extreme events, both in the United States and around the world," NOAA administrator Kathryn Sullivan said.

But the weirdness and extreme weather is not limited to 2011. A separate report released yesterday by NOAA found that the first half of 2012 has been the hottest six months on record in the continental United States.