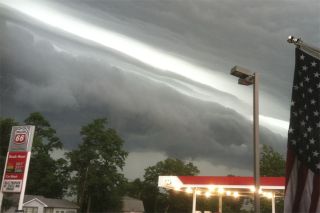 An ominous line of clouds portends the approaching derecho in La Porte, Ind., on the afternoon of June 29.
(Image: © NOAA/Courtesy of Kevin Gould. )

A destructive derecho — a rare, powerful, and long-reaching windstorm that accompanies lines of thunderstorms — swept from the Midwest to the East Coast on Friday, June 29, and a new video stitched together from satellite images shows the storm's furious progress.

To qualify as a derecho — the Spanish word for "straight," and pronounced deh-REY-cho — a storm must pack wind gusts of at least 58 mph (93 kph) throughout, and must cause wind damage across an area at least 240 miles (400 kilometers) wide.

Although the full power of the recent storm is still emerging, it appears it exceeded the qualifying requirements. The derecho moved approximately 450 miles (724 km) in six hours, at an average speed of 75 mph (120 kph). It swept southeast from northwestern Indiana, across Ohio, and into Pennsylvania and West Virginia, according to preliminary numbers from the National Oceanic and Atmospheric Administration's Storm Prediction Center.

The progress of the derecho can be seen in the new video, which shows the disturbance growing over Chicago and then charging across the country.

The storm downed power lines, and toppled trees from Illinois to Washington, D.C. Wide regions of the Mid-Atlantic states are still without power.

Derechos are extremely difficult to predict, but forecasters aren't expecting a repeat of Friday's weather any time soon. McMullen said they happen in his area about once a decade, and are fueled by the same conditions that give rise to thunderstorms — essentially, when cool air runs into hot air.

"We expect showers and thunderstorms today, but we don't think we're going to get a huge wind event like we had on Friday," said Brian Lasorsa, a meteorologist with the  National Weather Service's Baltimore/Washington, D.C., office. "There is a potential for damaging wind gusts, but it's not as widespread."

McMullen said that aside from thunderstorms that could hit today and during the Fourth of July holiday, the main concern is the heat forecastthrough the end of the week. In the Mid-Atlantic states, highs are expected to hover in the mid to low 90s, and many people may not have electricity until the weekend.