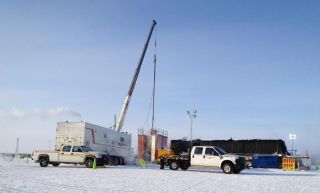 Icy prisons of natural gas known as methane hydrates may hold more energy than all of the world's coal, oil and other natural gas sources combined. The United States is planning production tests in Alaska and the Gulf Coast to unlock the methane from these crystalline structures using newly tested extraction technology — an effort that the U.S. Department of Energy says could slash natural gas prices 30 percent by 2025.

The untapped methane hydrates consist of natural gas locked inside molecule-size ice structures. They exist in huge quantities under the Arctic permafrost and in deep ocean sediments along almost every continental shelf. Recent field tests successfully injected a mixture of carbon dioxide and nitrogen into Alaskan methane hydrate deposits to produce natural gas.

"The Energy Department's long-term investments in shale gas research during the '70s and '80s helped pave the way for today's boom in domestic natural gas production that is projected to cut the cost of natural gas by 30 percent by 2025 while creating thousands of American jobs," Energy Secretary Steven Chu said while discussing the initiative May 2.

Hydrate solids were discovered in the 1800s but remained just a lab curiosity until the 1930s, when people found them clogging up natural gas lines. Countries including the U.S., Soviet Union, Japan and India eventually began investigating possible supplies of methane hydrates in the Arctic and beneath the world's deepest oceans.

The Department of Energy teamed up with ConocoPhillips and the Japan Oil, Gas and Metals National Corporation for proof-of-concept extraction tests that ran from Feb. 15 to April 10. Those efforts represented the first field trials for exchanging carbon dioxide with the methane locked inside methane hydrates — also raising the possibility of storing carbon dioxide, the greenhouse gas most associated with climate change. (Methane is another greenhouse gas.)

The DOE announced it would set aside $6.5 million to continue funding technologies for locating and safely extracting natural gas from methane hydrates. It has requested an additional $5 million in President Barack Obama's budget proposal for fiscal 2013 to fund year-round extraction tests in the Alaska North Slope.

Such tests won't immediately yield a new supply of natural gas or a steep drop in natural gas prices. But the DOE pointed out that the research efforts are similar to those in the 1970s and 1980s that eventually led to the current boom in shale gas from fracking, the fracturing of rock through liquid injections.