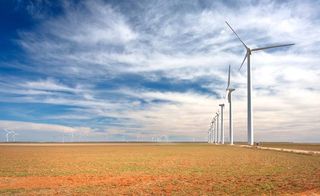 New research finds that wind farms actually warm up the surface of the land underneath them during the night, a phenomena that could put a damper on efforts to expand wind energy as a green energy solution.

Researchers used satellite data from 2003 to 2011 to examine surface temperatures across as wide swath of west Texas, which has built four of the world's largest wind farms. The data showed a direct correlation between night-time temperatures increases of 0.72 degrees C (1.3 degrees F) and the placement of the farms.

"Given the present installed capacity and the projected growth in installation of wind farms across the world, I feel that wind farms, if spatially large enough, might have noticeable impacts on local to regional meteorology," Liming Zhou, associate professor at the State University of New York, Albany and author of the paper published April 29 in Nature Climate Change said in an e-mail to Discovery News.

PHOTOS: Wind Power Without the Blades

Analysts say wind power is a good complement to solar power, because winds often blow more strongly at night while solar power is only available during daytime hours. But Zhou and his colleagues found that turbulence behind the wind turbine blades stirs up a layer of cooler air that usually settles on the ground at night, and mixes in warm air that is on top.

That layering effect is usually reversed during the daytime, with warm air on the surface and cooler air higher up."The year-to-year land surface temperature over wind farms shows a persistent upward trend from 2003 to 2011, consistent with the increasing number of operational wind turbines with time," Zhou said.

FAA data shows that the number of wind turbines over the study region has risen from 111 in 2003 to 2358 in 2011, according to the study.The warming could hurt local farmers, who have already suffered through a killer drought over the past few years. Texas agriculture contributes $80 billion to the state's economy, second only to petrochemicals, according to the Texas Department of Agriculture.

West Texas is a dry area that uses irrigation to grow wheat, cotton and other crops, as well as raise cattle. But increased warming can play havoc with plant growth, as well as change local rainfall patterns.

Texas wind farms produce more than 10,000 megawatts of electricity, more than double the capacity of the nearest state, Iowa, and enough to power three million average American homes, according to the American Wind Energy Association.

One solution could be to change the shape of the turbine blades, according to John Dabiri, director of the Center for Bioinspired Wind Energy at the California Institute of Technology who is an expert on wind power design.

"Smaller turbines can avoid this problem," Dabiri said. "However, this presents a tradeoff, because wind speed decreases as you move closer to the ground; so the smaller turbines would experience lower incoming wind speeds on average."

Dabiri said Zhou's findings may mean taking a second look at the trade-offs with renewable energy. "It shows that we need to think carefully about the unintended environmental consequences of any large-scale energy development," Dabiri said, "including green technologies."

Zhou cautioned that his study used satellite data, which can have errors from clouds, for example, rather than temperature readings taken at the surface. He said he hopes to improve his dataset, and look at wind farms in other parts of the world.