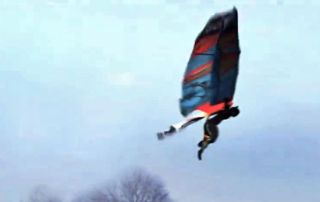 A Dutch engineer has stunned the world with a new video in which he is shown taking flight by strapping on a set of wings, running and flapping his arms like a bird. Using Nintendo Wii technology, Jarno Smeets has rigged a contraption in which the motion of his arms is synced to that of a huge pair of wings made of kite fabric. In his first successful flight on March 18, he apparently used his "Human Bird Wings" to soar a horizontal distance of 328 feet (100 meters) above a park in the Netherlands.

An overnight YouTube sensation, the video has racked up more than 1 million views in the past day, and it is only the latest in a series of popular videos tracking Smeets' progress over the past eight months as he has gradually gotten his Human Bird Wings project off the ground.

Smeets has been described as "a modern Leonardo da Vinci," and claims to have drawn inspiration from da Vinci's 500-year-old wing drawings to build his flying machine. Another inspiration, Smeets tells the world, is the albatross, one of nature's most proficient of flyers. [10 Inventions that Changed the World]

But is the whole thing fake, a clever advertisement for one of the companies featured in the clip? An expert on viral videos thinks so.

As mentioned prominently in his video descriptions, website and press releases, Smeets' wings are manipulated using Nintendo Wii remote controllers and accelerometers from an HTC Wildfire S android smartphone, and they're powered by Turnigy motors. He used a GoPro helmet camera to film his flight.

"I am about 85 percent certain this is a BVMP (branded viral movie production)," said Brent Coker, an Internet marketing expert at the University of Melbourne. Coker put out a theory last year highlighting what it takes for a viral-produced movie to actually go viral, and Human Bird Wings appears to have all the elements of success.

First, the Wii and other products being mentioned are congruent with the supposed lifestyle of Smeets and the other tech-savvy guys on his team. Moreover, the video has strong emotional appeal: At the end, Smeets tells viewers, "At one moment you see the ground moving away, and then suddenly you’re free, a really intense feeling of freedom. The true feeling of flying. A [bleep] magical moment. The best feeling I have felt in my life!"

Third, the video appeals to a wide network of people — young DIY types as well as anyone who has ever dreamed of flying like a bird. Lastly, it combines two approaches that work well together in viral ad campaigns, according to Coker's research: In the video, viewers see something extremely surprising, and they're also likely to imagine themselves being friends with Smeets and his collaborators and sharing their ideals. These four attributes are a recipe for success, Coker said.

So, if it is an ad, who's behind it? Coker told Life's Little Mysteries that any of the companies featured could have commissioned the videos, with Nintendo being the most likely. But so far, none are coming forward.

GoPro has been linked to several other viral video advertising stunts, but GoPro spokesman Rick Loughery said his company had nothing to do with it. "We don't have any connection with the video except that we have been sharing it around the office and think it's cool," he said. Nintendo did not respond to requests for comment.

An elaborate ad campaign or otherwise, Coker thinks the footage is fake. This isn't obvious in the latest video of the successful flight, but an earlier outtake of a short hop into the air on Jan. 20 was clearly tampered with. At the 1:51 minute mark, the cameraman pans away from Smeets wearing his Human Bird Wings just as he begins to flap his arms. When the camera pans back, Smeets and his contraption have been replaced with a CGI (computer generated imagery) human and wings. "That method of pan away just before the CGI action is common [in faked videos]," Coker said.

The March 18 video was made with more care, but it, too, strikes CGI experts as an elaborate fake. Ryan Martin, Technical Director at Industrial Light & Magic, and his colleagues told the techblog Gizmodo that the video's poor focus covers up most evidence of CGI, but that the cloth material of Smeets' wings looks unnaturally stiff, and is computer generated. Furthermore, the experts point out that the animation cycle of Smeets flying through the air seems to be modeled on a clip of a flying monkey in the Wizard of Oz. However, Martin and his colleagues also view the pan-away in the Jan. 20 video, and the differences between Smeets' and the wings' appearance before and after the pan, as the smoking gun that the whole Human Bird Wings project is a fraud. In particular, after the pan, a black square appears on the right wing that was clearly not there before.

In short, unfortunately, it seems that humanity has yet to achieve the flight of the albatross.