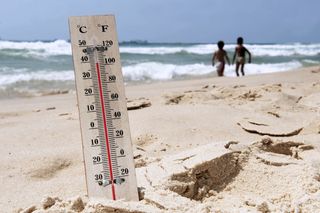 One answer to that is yes, at least in some circles: climate scientist Peter Gleick's actions prompted statements from major scientific organizations, including the Union of Concerned Scientists and the American Geophysical Union. And the climate blogosphere and science press have been buzzing over "Heartlandgate" and "Denialgate" and any other number of nicknames for the scandal since the documents hit the Internet.

But in the grand scheme of things, the document leak may be too "inside baseball" to make a big difference in how the general public views climate change.

"The people who are going to pay attention to this story are the people who are the most interested in this topic and probably already have pretty strong opinions about it one way or another," said Anthony Leiserowitz, director of the Yale Project on Climate Change Communication. "So its main impact will probably be to reinforce the beliefs that people already have as well as to rile up both sides."

The impact of climate scandals

The document leak hit the news on Feb. 14 and 15, with Gleick copping to obtaining the documents on Feb. 21. The Heartland Institute contests the veracity of one of the documents, supposedly the group's 2012 plan for climate change communication. They do not contest the other documents, which include lists of donors, fundraising plans, and outlines of projects, including one to create school-friendly curricula that would inject doubt about the scientific consensus regarding man-made climate change.

The timing puts "HeartlandGate" in a different category than "Climategate," the 2009 hacking and release of emails between climate scientists. Those emails hit the Internet only weeks before the Copenhagen Summit on climate change, so global warming was already in the news, Leiserowitz told LiveScience.

"About 25 percent of Americans had heard of it as of January 2010," Leiserowitz said. That number is "pretty significant" for any given news story, he said.

Surveys by Leiserowitz and his colleagues found that 12 percent of Americans said Climategate made them less convinced that human-caused climate change was happening and that it lowered their trust in climate scientists. But that 12 percent was clustered on one side of the political spectrum.

"It was highly concentrated among people who tend to be Republican, tend to be conservative, tend to have what we call a highly individualistic worldview," Leiserowitz said.

In other words, the impact of Climategate was to strengthen the beliefs of people who already disbelieved climate change. Belief in climate change is highly correlated with political party. According to surveys conducted in 2011 by the Yale Project on Climate Change Communication, 78 percent of self-described Democrats believe global warming is happening, compared with 71 percent of Independents, 53 percent of Republicans and 34 percent of Tea Party members. [Life's Extremes: Democrat vs. Republican]

The Climategate emails may have had important policy impacts, though, Leiserowitz said. Policymakers were looking at climate change solutions just as Climategate broke, and "anyone who was on the fence" could have been swayed against voting for carbon emission caps, for example.

The Heartland document leak isn't tied to any major event like the Copenhagen Summit, and it's not getting the same media play as Climategate. That means that while the documents and Gleick's responsibility will likely be sticks for climate activists and climate skeptics to beat each other with, the "flame war" isn't likely to sway public opinion, Leiserowitz said.

"In the end, it's not clear to me how many people in the public are actually going to ever even know about it," he said.

Scandals may have a limited impact in part because of a psychological phenomenon called "motivated reasoning," which simply means that people focus on evidence that confirms what they already believe and ignore evidence that doesn't fit their worldview. The Yale group's surveys have found that seemingly irrelevant factors have much more to do with people's acceptance of climate change. [10 Surprising Results of Global Warming]

One of these factors is "the economy, the economy, the economy," Leiserowitz said. Climate change concern was at a peak in 2007 and 2008, but when the recession hit, that concern plummeted like a stone. People can only worry about so many things at a time, Leiserowitz said. Media coverage of climate issues is also down by at least two-thirds in newspapers and 80 percent on the nightly news since 2007, another factor that drives public interest, their surveys have shown.

Even the daily weather may sway public opinion on climate change, with people more likely to believe in global warming on warmer-than-average days.

A study released this month in the journal Climate Change found that the rhetoric and actions of political elites and advocacy organizations drive a large chunk of public opinion surrounding climate change.

The rise of the largely climate change-denying Tea Party has driven Republican candidates rightward in denying global warming, Leiserowitz said. In the meantime, advocacy organizations like Heartland have been successful in shifting public discourse, he said.

"They've been pretty effective at drumming home a single message: that the science is unsettled and that scientists don't agree," Leiserowitz said. Surveys of climate scientists suggest that between 85 percent and 97 percent agree that climate change is happening and that it is man-made.

"Only 13 percent of Americans understand that," Leiserowitz said. "That's not by accident."