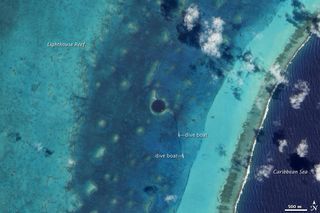 Clues to how life evolved, not only on this planet but also possibly on alien worlds, might be found in underwater caves in the Bahamas, researchers say.

The caves in question are called "blue holes," so-named because from the air, their entrances appear circular in shape, with different shades of blue water in and around them. There are estimated to be more than 1,000 such caves in the Bahamas, the greatest concentration of blue holes in the world.

"It's really incredible to be swimming down a passage that no one has ever been in before, to experience that thrill of discovery," said researcher Tom Iliffe, a marine biologist at Texas A&M University at Galveston. "At the bottom of a cave, there's no telling what might be around the next corner."

Iliffe and his colleagues examined three inland blue holes in the Bahamas. They discovered that layers of bacteria exist in all three, but each of these water-filled sinkholes had significantly different microbes living in them from the others.

Within each blue hole, the microbes the researchers found varied depending on the depth, owing to how the water in them was separated into distinct fresh- and saltwater layers as well as oxygen-poor or virtually completely oxygen-depleted layers. The blue holes also varied from each other due to differences such as food sources.

"We examined two caves on Abaco Island and one on Andros Island," Iliffe said. "One on Abaco, at a depth of about 100 feet (30 meters), had sheets of bacteria that were attached to the walls of the caves, almost one inch (2.5 centimeters) thick. Another cave on the same island had bacteria living within poisonous clouds of hydrogen sulfide at the boundary between fresh- and saltwater. These caves had different forms of bacteria, with the types and density changing as the light source from above grew dimmer and dimmer."

"In the cave on Andros, we expected to find something similar, but the hydrogen sulfide layer there contained different types of bacteria," Iliffe added. "It shows that the caves tend to have life forms that adapt to that particular habitat, and we found that some types of the bacteria could live in environments where no other forms of life could survive. This research shows how these bacteria have evolved over millions of years and have found a way to live under these extreme conditions." [Harshest Environments on Earth]

The fact that each cave has different conditions from the others and thus a different palette of life helps scientists analyze the diverse routes life might have taken on Earth, given slight tweaks in their initial brews.

"These bacterial forms of life may be similar to microbes that existed on early Earth and thus provide a glimpse of how life evolved on this planet," Iliffe explained. "These caves are natural laboratories where we can study life existing under conditions analogous to what was present many millions of years ago."

Specifically, "these caves have no light and therefore no photosynthetic production of oxygen, which means the dissolved oxygen levels are either low or nonexistent, similar to the environments that probably existed on the early Earth," Iliffe said.

These findings might also shed light on how life might have developed on distant planets and moons.

"As far as we know, no surface waters currently exist anywhere else in our solar system, but there might be water beneath the surface, say on Mars or moons like Europa," Iliffe said. "These are areas of total darkness, and so the caves on Earth we are exploring might be similar."

More known about the moon

There are tens of thousands of underwater caves scattered around the world, but less than 5 percent of these have ever been explored and scientifically investigated, Iliffe said.

"We know more about the far side of the moon than we do about these caves right here on Earth," Iliffe said. "There is no telling what remains to be discovered in the many thousands of caves that no one has ever entered. If life exists elsewhere in our solar system, it most likely would be found in water-filled subterranean environments, perhaps equivalent to those we are studying in the Bahamas."

Iliffe, along with Brett Gonzalez and their colleagues, detailed their findings in the November issue of the journal Hydrobiologia.