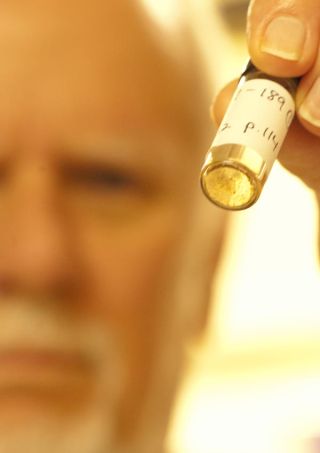 Jeffrey Bada holds a preserved sample containing amino acids created by a 1958 experiment done by his mentor Stanley Miller. The results of this previously unanalyzed experiment have implications for our understanding of how life originated.
(Image: © Scripps Institution of Oceanography, UC San Diego)

An old experiment, rediscovered after more than 50 years, may demonstrate how volcanoes – and possibly chemical reactions far from primitive Earth in outer space – played a role in creating the first amino acids, the building blocks of life.

In 1953, chemists Harold Urey and Stanley Miller performed a landmark experiment intended to mimic the primordial conditions that created the first amino acids, by exposing a mix of gases to a lightning-like electrical discharge. Five years later, in 1958, Miller performed another variation on this experiment. This time he added hydrogen sulfide, a gas spewed out by volcanoes, to the mix. [Scientists Hunt for Signs of Earliest Life on Earth] But for some reason, Miller never analyzed the products of the hydrogen sulfide reaction. About half a century later, Miller's former student Jeffrey Bada, a marine chemist at the Scripps Institution of Oceanography in California, discovered the old samples in a dusty cardboard box in Miller's laboratory, which Bada had inherited. (Miller passed away in 2007.)

Using modern analytical techniques, Bada and his team, which included Eric Parker, then at Scripps, analyzed the products of the reaction, which were housed in small vials. They found an abundance of promising molecules: 23 amino acids and four amines, another type of organic molecule. The addition of hydrogen sulfide had also led to the creation of sulfur-containing amino acids, which are important to the chemistry of life. (One of these, methionine, initiates the synthesis of proteins.)

The results of the experiment – which exposed a mix of volcanic gases, including hydrogen sulfide, methane, ammonia and carbon dioxide gas to an electrical discharge – tell us that volcanic eruptions coinciding with lightning may have played a role in synthesizing large quantities and a variety of biologically crucial molecules on the primitive Earth, Parker, now a graduate student at Georgia Institute of Technology, told LiveScience.

"The gas mixture Miller used in this experiment was likely not ubiquitous throughout early Earth's atmosphere on a global scale, but it may have been common on a more local scale where there was heavy volcanic activity," Parker said.

Parallel to the Urey-Miller experiment

By comparison, the famous Urey-Miller experiment in 1953 exposed hydrogen, steam, methane and ammonia to an electrical discharge. The initial results included far fewer organic molecules – only five amino acids. However, Bada and his team reanalyzed these old samples along with previously unpublished results with modern techniques, revealing a much greater variety of biologically important products.

The results of the 1958 experiment, however, show that adding hydrogen sulfide to the reaction enriches the mixture of organic molecules produced, according to Bada.

The 1958 reaction – which also incorporated carbon dioxide, a gas not included in the earlier experiment – created a mix more like that which geoscientists now believe made up the atmosphere of primordial Earth, Parker said.

Amino acids, which combine to form proteins, which, in turn, form cellular structures and control reactions in living things, are not unique to Earth. They have been found on meteorites, mainly from samples acquired from asteroids and from one comet, according to Scott Sandford, a research scientist at NASA's Ames Research Center in California.

Bada's team compared the amino acids produced by the 1958 experiment with those contained in a type of carbon-rich meteorite, known as a carbonaceous chrondite. These meteorites are believed to provide snapshots of the types of organic reactions that took place in the early solar system, Bada told LiveScience in an email.

The researchers compared the amino acids produced by the hydrogen sulfide experiment with those contained by several carbonaceous chrondites. Some matched well, while others did not, suggesting that hydrogen sulfide played a role in the synthesis of amino acids in certain environments within our early solar system, but not in others, Bada wrote. Although the meteorites are all from our solar system, the same results would be expected in other solar systems elsewhere in the universe, he said.

There is a theory that life on Earth got a jump start from organic molecules when they arrived on the planet from space, Sandford told LiveScience. There is no doubt that space delivers much of the molecular building blocks for terrestrial life, but the question is the role the molecules played in getting life started, he added.

"In the end, if life was trying to get started, my guess is the process wasn't very picky about where the molecules came from," Sandford said. "[Early life] didn't care if that amino acid was formed in space or a lightning strike in Earth's atmosphere or came out of a hydrothermal vent… So in the end, it is possible life got started from acquiring building blocks from a wide variety of sources."

Sandford's work involves simulating ices found in many environments in space – including comets – that contain molecules similar to those used in the Urey-Miller experiment, and bombarding them with ionizing radiation. And like the reactions believed to have taken place on primordial Earth, these simulated cosmic ice reactions synthesize amino acids.

"At some level, the universe seems to be hard-wired to create amino acids, provided you have the right elements present and energy," he said.

A smelly piece of science history

It's not clear why Miller never analyzed the samples he produced with the hydrogen-sulfide experiment, but Parker speculates that it may have had something to do with the rotten-egg odor of hydrogen sulfide.

"When I was working with them by hand I could smell them myself," Parker said. "It wasn't so strong that it was overpowering, but it was strong enough to convince me to not stick my nose in front of it again."

But, unpleasant odors aside, the experience was a memorable one.

"It is sort of surreal to hold the sample vial in your hands and look at Stanley Miller's handwriting on the label," Parker said. "It was a very unique opportunity to go back in time and look at what he did and be able to use modern analysis techniques to be able to analyze samples produced over 50 years and see what they still contain today."

Their work is published this week in the journal Proceedings of the National Academy of Sciences.