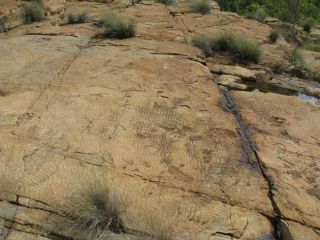 Fossilized ripple marks from the 2.9 billion years old Pongola Supergroup rock in South Africa. These ripple marks record the interference of microbial life with water currents. Studies show that such ripples form over the course of a year in a storm-dominated, moderate climate zone.
(Image: © Nora Noffke)

No one knows when the very first life on Earth appeared – though what little evidence scientists have indicates that life was present not very long after our planet formed.

Fossil hunters are continually scouring the globe for rocks betraying signs of even more ancient life forms, and controversy reigns over claims of the earliest evidence for life.

One such fossil hunter is Nora Noffke, a trace fossil sedimentologist at Old Dominion University in Norfolk, Va. Noffke and team recently found rocks in South Africa with evidence of cyanobacteria dating from 2.9 billion years ago, which is the oldest confirmed evidence of these life forms. Cyanobacteria is a type of single-celled bacteria – still thriving on the Earth today – that gains its energy from sunlight, through photosynthesis.

The Earth itself is thought to be about 4.5 billion years old.

Scientists have claimed to find signs of other types of primitive life from even earlier in Earth's history – as far back as 3.4 billion years ago – but those claims are disputed by some in the field.

Noffke describes her findings and the continuing quest to search for early life in a new technical book called "Geobiology: Microbial Mats in Sandy Deposits From the Archean Era to Today" (Springer, June 28, 2010).

Primitive life left its mark on Earth by transforming rocks, creating patterns and minerals only formed in the presence of life. Such signs are called biosignatures.

Noffke has spent years honing her ability to spot these signs with the naked eye.

"I know exactly what to look for and where to look for it," she told LiveScience. Once she finds a promising site, "then we sample very carefully and we run a lot of analyses to see what is actually present."

The cyanobacteria that Noffke looks for grew on beach sand as microbial mats – wide, thin layers that resemble carpets on the ground. Such carpets are composed of trillions of individual bacterial cells, and leave characteristic traces in the rock that later forms from the sand.

The earliest cyanobacteria traces Noffke has found, dating from 2.9 billion years ago, come from a deposit called the Pongola Supergroup in KwaZulu-Natal, South Africa.

Those bacteria were already relatively advanced, though, so their progenitors likely originated even before then, she said.

"Cyanobacteria are already highly complex prokaryotes," she said. "They take quite some while to develop – how long, no one knows, but it's not something that happens within a few million years."

Thus, it appears that some living creatures were present on our planet not long after its formation about 4.54 billion years ago.

It's also likely that life existed in abundance during these early times, even though scant signs remain today.

After all, Noffke said, most rocks from that period are long gone, and any lasting sign of life from the earliest epochs on Earth would be very hard to come by, Noffke said.

"The really old rocks were recycled back into the Earth's mantle, and are simply not accessible anymore," Noffke said. "The rocks that we have are a very small fraction of what existed because of plate tectonic processes."

Scientists think much of the Earth's early reservoirs of oxygen were provided by this early single-celled life.

"The question is, when does the first measureable oxygen actually occur in Earth's history?" Noffke said. "If there were cyanobacteria that were able to produce oxygen 3 billion years ago already, then that might have enabled higher organisms to evolve."