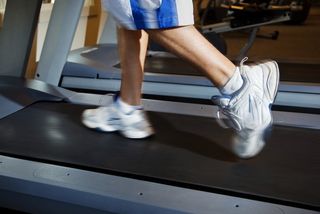 Bosses who vent their frustrations on employees might benefit from a half-hour meeting with a treadmill, according to new research that finds exercise can soothe supervisor abuse.

While some cases of workplace bullying are too extreme to be fixed by regular gym sessions, bosses who are under a lot of pressure may transfer less of that pressure to underlings if they get a couple days of moderate exercise each week.

Researchers at Northern Illinois University and the University of Illinois at Chicago asked 98 MBA students and their 98 supervisors to fill out surveys on their workplace experiences. Students answered questions about how abusive their supervisor was, such as whether their supervisor put them down in front of others or told them they were stupid. The supervisors reported how often they exercised; they also answered questions about their levels of workplace stress and amount of free time.

The results, published Jan. 6 in the Journal of Business and Psychology, showed that employees rate stressed supervisors as more abusive than more chill bosses. No surprise there, but the research also revealed that moderate levels of exercise minimized this nasty "trickle-down" effect, even as those bosses remained stressed.

Type of exercise didn't matter, and supervisors needed just a moderate workout one or two days a week. So next time your boss bashes you in a meeting, see if you can get an office pool going to gift him or her some yoga lessons. It could make everyone's life easier.