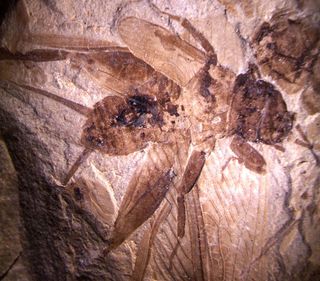 Fine-grained lake sediment covered and buried the animals that lived in the Green River Formation, preserving them in exquisite detail.
(Image: © University of Colorado Museum; photo courtesy of Dena Smith)

Various species of insects boast ears in the strangest places, including on their necks and under their wings. Now, a new examination of 50-million-year-old cricket and katydid fossils finds that these odd ears evolved before even the appearance of the predators that these ears can hear.

Crickets, moths and other flying insects can hear the ultra high-pitched sonar of hunting bats, a talent that helps them avoid being eaten. Researchers suspected that the appearance of bats on the scene triggered the evolution of these sensitive ears. But the new research reveals that crickets and katydids had modern ears 50 million years ago, before echolocating bats evolved.

"Their bat-detecting abilities may have simply become apparent later," study researcher Dena Smith of the University of Colorado, Boulder, said in a statement.

Insects have evolved ears at least 17 times in different lineages, and other insects, such as the blue morpho butterfly, may even be able to distinguish between low and high pitches with their primitive under-wing ears. But the fossil record has been too sparse to determine whether bats can take credit for certain bugs' hearing boost.

Smith and her colleague Roy Plotnick of the University of Illinois at Chicago turned to the Green River Formation, a series of lake deposits in Wyoming, Utah and Colorado that preserved ancient insects in remarkable detail — down to the veins in their wings and the hairs on their legs.

That level of detail is key, because the researchers were looking for katydid and cricket ears. These insects hear using tiny oval cavities just under the knees of the front legs. Each cavity is the size of the eye of a needle.

The results, published in the January 2012 issue of the Journal of Paleontology, revealed that these ancient insects had ears virtually identical to cricket and katydid ears today. That means that these insects evolved their supersensitive hearing before bat predators came to be. (The world's oldest bats come from the same time period as these insects, though not all of them used echolocation to hunt.)

"The next step," Smith said, "is to look for ears in other insect groups."