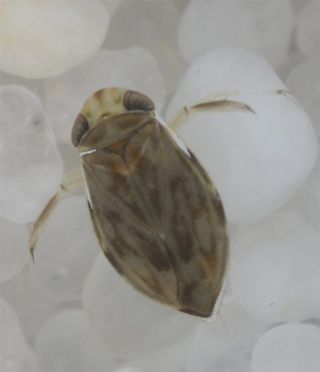 The water boatman (Micronecta scholtzi), above, is only 0.8 inches (2 mm) long but is the loudest animal ever to be recorded, relative to its body size, outperforming all marine and terrestrial species.
(Image: © Jerome Sueur.)

A tiny water-dwelling insect has the loudest song for its size in the world, researchers find — a mating call it probably makes with its genitals.

Discovering how such a little insect makes such a big sound could have sonar and other acoustic applications, scientists noted.

The creature in question is the water boatman, Micronecta scholtzi, an insect commonly found in rivers and lakes in France. It is only 2.3 millimeters long (less than a tenth of an inch), but at 99.2 decibels, its song is as loud as an orchestra from a front-row seat.

"Remarkably, even though 99 percent of sound is lost when transferring from water to air, the song is so loud that a person walking along the bank can actually hear these tiny creatures singing from the bottom of the river," said researcher James Windmill, an electronic engineer at the University of Strathclyde in Glasgow.

The song of the males has a frequency of approximately 10 kilohertz, within the human hearing range. They males apparently make the sound by rubbing their genitals against ridges on their bodies, playing in chorus with other males to court females. [Top 10 Swingers of the Animal Kingdom]

Other creatures are louder in sheer terms of decibels  — the sperm whale is likely the loudest in the animal kingdom, capable of producing 236 decibels. However, when compared to size, the sound of the water boatman apparently has all other animals beat.

The area used to make these sounds in water boatmen is only about 50 microns wide, roughly half the width of a human hair. "We really don't know how they make such a loud sound using such a small area," Windmill said.

The secret might be in the air it breathes. The water boatman is partly covered by a layer of air it uses to breathe, and "this air layer might be involved in sound generation, but nothing is clear yet," explained researcher Jerome Sueur, a bioacoustician at the French National Center for Scientific Research, in Paris.

"Then there's the question of why so loud," Sueur said. "It could be that the loudest male wins, or at least can broadcast his song the farthest, so has a greater chance of a potential mate hearing him. We also have a theory that, because it's unlikely there are any predators listening for this sound, evolution has caused the males to get louder and louder through competition." [Infographic: The Loudest Animals]

Uncovering how such a little insect can broadcast such a big sound could lead to devices with similar capabilities. "This could be useful then in sonar systems, for example, or other industrial uses of sound — for example, medical ultrasound," Windmill told LiveScience.

In addition, learning more about why animals make sounds could help scientists learn more about the environment.

"Sound produced by aquatic insects could be an excellent way to measure biodiversity or pollution in water systems," Sueur said. "By simply recording the sounds generated by the different bugs living underwater, you could measure how many there are and which species, allowing you to monitor over a long time what's happening to the wildlife in the water."

Sueur, Windmill and their colleague David Mackie detailed their findings online June 15 in the journal PLoS ONE. They plan to present their work at the Society for Experimental Biology annual conference in Glasgow July 2.