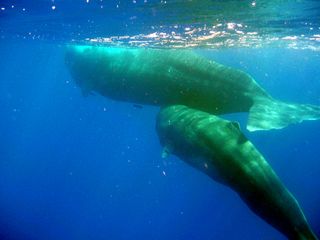 Two members of “the best studied social unit of sperm whales in the world,” Mother “Fingers” and her baby “Thumb,” swim together off the coast of Dominica.
(Image: © Shane Gero)

Sperm whales like to be individuals; they use accents to identify themselves to others in their extended family group, new research finds.

The accents are specific to one call, or "coda," used by whales worldwide, enabling them to recognize strangers from any region.

"It's not that the individuals in a group are making different codas, they don't have different names, they just say the same things in different ways," said study researcher Shane Gero, of Dalhousie University in Halifax, Nova Scotia, Canada. "We believe they can pick between each other, that they can tell each other apart by this call."

Sperm whales live in family groups, with several generations of females living together with their young. They communicate using these codas, specific combinations of clicking sounds. The codas travel for about a kilometer in the ocean, and they are used mostly within a group to communicate during dives and social situations.

The team followed one group of sperm whales, called the "group of seven," made up of four sisters, their aunt and two juvenile males, for more than 40 days while the animals fed off the coast of Dominica, a Caribbean island.

Previous research had shown that sperm whales are able to identify, and preferentially spend time with, certain group members. This doesn't seem like a great feat to landlubbers like humans, but in the deep, dark ocean vision isn't something whales can rely on, so they have to find other ways to hunt and identify themselves.

The "five regular" call is one of the few codas that all sperm whale groups, no matter where they live — the Caribbean, the Pacific or the Mediterranean Sea — use in their regional dialects. "The fact that it's that one that appears to carry a signal of identity is pretty interesting," Gero told LiveScience. "You don't want to mess up the call that everyone uses to identify everyone."

Increasing ocean noise, from underwater drilling operations and shipping traffic, may interfere with these social calls. "These calls are important, likely, for keeping groups together and also for knowing where and if another group is coming up. Their whole life is based on sound," Gero said. "When you increase the background noise, you start disrupting their lives."

Continued observation of these animals over the years and in different social situations will give the researchers more clues to how they use these calls.

The study was published in the April 2011 issue of the journal Animal Behavior.