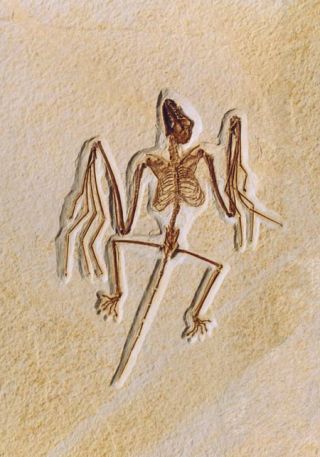 A cast of Onychonycteris finneyi, a new primitive bat fossil. Wing digits are well laid out on viewer's left side and show small claws on tip of each finger.
(Image: © © Royal Ontario Museum 2008, all rights reserved)

Early bats could fly, but they probably had trouble knowing where they were going.

Scientists have discovered the skeleton of the most primitive bat known. It had functioning wings but no ability to perceive space through echoes, as modern bats do.

Unearthed in Wyoming, the near-complete fossilized skeleton dates from the Early Eocene epoch, about 52.5 million years ago. The shape of its skull indicates that the flying mammal lacked the ability to echolocate — that is, to judge distance and direction by sending out a call and analyzing the way it echoes back.

"I was very surprised when we discovered that, because I had been so used to the fact that Eocene bats were echolocating bats," said Nancy Simmons, an evolutionary biologist at the American Museum of Natural History in New York, who studied the fossil. "There are several other species from the Early Eocene that could echolocate. To find one that doesn’t echolocate is really exciting."

The discovery is significant because it helps to settle a long-standing scientific question.

"One of the really exciting things about this is it gives us a chance to look at an old problem — which came first, echolocation or flight?" Simmons told LiveScience. "We haven't been able to decide. Now, we have strong support for the flight-first hypothesis because we actually have a primitive bat that could fly but lacks the features involved in echolocation. This gives us a nice solution to a scientific problem that's been bothersome for some time."

The primitive bats probably had to rely on vision, smell and regular hearing to navigate and hunt.

"It's a new branch of the bat family tree," Simmons said. "It can't be placed in any previously known family."

The shape of its limb bones indicates that this creature may have been an agile climber with the ability to climb trees and hang from branches.

"Probably it was quite good at scrambling around by hanging under branches because its hind limbs were proportionately longer than most bats'," Simmons said.

The scientists think this fossil may represent a bridge point between bats and their mammalian ancestors. Although the most primitive bat ever found, it is not the oldest. O. finneyi dates from about the same time as a creature called Icaronycteris, whose fossil was previously found in the same area. This fossil's skull shape suggests that it did have the ability use echolocation to hunt its insect prey.

The newly discovered species is described in the Feb. 14 issue of the journal Nature.