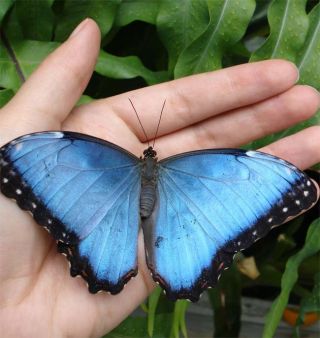 The blue morpho butterfly shows off its brightly colored wings when in flight. But at rest, with closed wings, the butterfly reveals a dull brown color that helps the animal blend in with its surroundings.
(Image: © Kathleen Lucas.)

A butterfly species equipped with tiny ears on its wings can distinguish between high and low pitch sounds, possibly as a way to listen in on nearby birds, new research suggests.

Scientists thought butterflies were deaf until 1912 when the first butterfly ears were identified. Only in the past decade or so have researchers examined the anatomy and physiology of butterfly ears, which they are finding to be quite diverse and present in several butterfly species.

The latest discovery was made with the blue morpho butterfly (Morpho peleides), which dazzles with its bright-blue wing coloration when it flits about in its native Central and South America.

Scientists knew from relatively recent research that the morpho sports simple wing ears. In the new study, Kathleen Lucas of the University of Bristol in England and her colleagues were interested in the odd-looking hearing membrane that sits at the base of the blue morpho's wing. The tympanal membrane, as it is called, is oval-shaped with a dome at its center that kind of resembles the yolk at the center of a fried egg, Lucas said.

Sound waves from, say, crackling leaves or a singing bird hit the membrane and get converted into nerve impulses by nearby sensory organs. Those impulses are picked up by nerve cells.

To figure out how the fried-egg membrane helped the butterfly hear, the researchers played sounds of various frequencies within the butterfly's estimated hearing range, between 1,000 Hertz and 5,000 Hertz. For comparison, our hearing range extends from 20 Hz to 20,000 Hz, though most speech lies between 100 Hz and 4,000 Hz.

Overall, the membrane vibrated more with lower frequencies, Lucas said. And measurements of nerve responses suggested the butterfly ear is extra sensitive to such pitches. Taken together, the vibrational and nerve recordings suggest this butterfly can distinguish between different pitches, though further research is needed to confirm this ability.

"Not a lot of ears are able to do that," Lucas told LiveScience. "The moth ear is a simple responding ear; it listens to a certain frequency range, and it doesn't matter what frequency it is within that range, [the moth] hears it and initiates an escape response."

As for why the morpho butterfly would need such expert ears, Lucas speculates they could help the butterflies figure out if birds are about to attack. Lower pitch sounds would indicate the flapping of bird wings, Lucas said, which could signal the butterflies to turn tail and fly away.

If the butterfly detected higher frequencies, like those of bird songs, it would signal the butterfly to remain at rest, a posture that keeps the butterfly hidden. The butterfly's blue coloration only covers the inside of the wings, and thus only shows up in flight. At rest with the wings closed, the butterfly would only show its dull, brown coloring.

The research is detailed in a recent issue of the Journal of Experimental Biology.