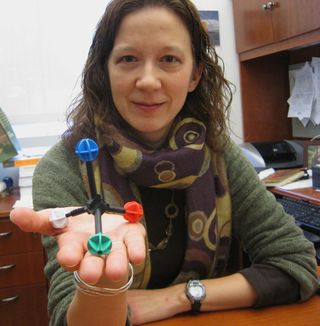 Many of Elizabeth Harbron's lab staff come from the organic chemistry sections she teaches, where she uses molecular model kits to show the three-dimensional structure of molecules.
(Image: © Stephen Salpukas, College of William & Mary)

Chemist Elizabeth Harbron is a substantial one-woman patch staunching the "leaky pipeline" phenomenon: The steady attrition of women during the educational process that leads to science careers. Over the years, the makeup of her lab groups at the College of William & Mary have been predominantly (but not exclusively) undergraduate and also have become predominantly (but usually not exclusively) female.

It's pure coincidence that a substantial part of their research has become known as "The Pink Projects," a pair of investigations involving the use of colorful rhodamine dyes as sensors. She's an organic photochemist, and most everything in her lab will light up, given the proper stimulus. She also has received a number of awards. In 2010, Harbron was one of six United States chemists to be named a Henry Dreyfus Teacher-Scholar, an honor that acknowledges the incorporation of undergraduate students into research activities.

What inspired you to choose this field of study? I study molecular fluorescence, and my first experience with it actually came early in my childhood. There was a large "bug zapper" that hung outside a window in our house, and I remember making drawings with fluorescent crayons and rushing to the window at night so I could watch them glow in the black (ultra violet, or UV) light of the zapper.

Perhaps it's not a surprise that I became an organic photochemist in graduate school and used UV lasers to induce reactions. I eventually returned to fluorescence as a postdoctoral researcher and have remained in the field due to my continued fascination with fluorescence. I love its brightness (we can detect fluorescence from a single molecule in my lab), its connection to organic structure (we can tweak a structure and change the color or brightness of fluorescence), and the numerous ways it can be manipulated (we can turn it on or off or change its color in response to a signal).

What is the best piece of advice you ever received? A college admissions counselor once stressed to me the importance of doing what you love as your career. It sounds simple and perhaps even trite, but it has stuck with me all these years. I feel fortunate to be deeply passionate about my career, and I now talk with my own students about identifying their talents and passions so that they can figure out how to do what they love.

What was your first scientific experiment as a child? I was never the kind of kid who played with a chemistry set or electronics kit; I was much more likely to experiment in the kitchen or in the outdoors. The first experiment I can remember involved the creek that ran near my house. The creek was running fast and high during a flood, and I remember dragging a friend to a bridge that ran over the creek so that we could drop sticks from one side of the bridge and record how long it took them to make it to the other side. I wanted to have a measure of the water flow rate during the flood so I could compare it to the rate under normal conditions. I don't recall ever doing the control experiment, but I enjoyed playing with and occasionally measuring that environment throughout my childhood.

What is your favorite thing about being a researcher? The "ah-ha!" moment has always been the best part of research for me. It's not unusual to obtain puzzling and seemingly contradictory results in the lab. Not understanding what the data mean can be very frustrating until that magic moment when everything suddenly snaps together in my mind.

The "ah-ha" reveals what is really occurring in the system we're studying, and it's often a different story than what I had initially expected. After that realization, it's straightforward to design other experiments to verify that the new story is correct. These "a-ha" moments occur most often at unexpected times outside of the lab, while showering, running or working around the house. It's a good reminder that working harder and longer is not always the best way to get the insight you need to complete a project.

What is the most important characteristic a researcher must demonstrate in order to be an effective researcher? I believe that one must have excellent observational skills to be an effective researcher. When running an experiment, tiny details that might seem trivial could later end up being significant. Researchers who don't observe and make note of everything that's happening may miss what will turn out to be the most crucial piece of information for solving a problem. We've seen this again and again in my lab where observations about subtle changes in color or fluorescence intensity ended up being the key to understanding the molecules that we were studying.

I think that people who aren't in research sometimes don't understand how many of our experiments fail and how much time is spent on science that isn't working and data that don't make sense. A new project often involves more failed experiments than successful ones, and it can be a slow march forward until you hit that critical combination of knowledge and technique that allows you to obtain good data. I think we appreciate the successful experiment all the more for having first gone through the prior failures.

If you could only rescue one thing from your burning office or lab, what would it be? Only one thing?! I would probably take the fluorimeter with its computer. Every project in the lab involves fluorescence, and the data from that instrument is usually the most important of any paper we write. I can't imagine living without it! It was also the first piece of equipment that I bought when I got my National Science Foundation grant, so there is some sentimental value there as well.

What music do you play most often in your lab or car? My students control the music in the lab, and songs from Glee and the Mamma Mia soundtrack are recent favorites. I have the magic ability to walk into the lab just as someone has decided to sing along to a chorus, so we end up laughing a lot about the music and the singing. When I'm in the lab alone, I tend to favor podcasts, but I usually turn them off if my students are there. I don't expect them to enjoy "Ready, Set, Knit" or "Wait, Wait, Don't Tell Me" as much as I do.

Editor's Note: This research was supported by the National Science Foundation, the federal agency charged with funding basic research and education across all fields of science and engineering. Any opinions, findings, and conclusions or recommendations expressed in this material are those of the author and do not necessarily reflect the views of the National Science Foundation. See the ScienceLives archive.