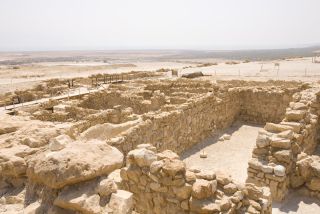 First excavated by Roland de Vaux in the 1950s, the site of Qumran in Israel is mired in controversy. De Vaux believed that it was a monastic settlement used by the Essenes and that the Dead Sea Scrolls were composed here. More recent archaeological work has cast doubt on this idea. The new textile research may help resolve the debate.
(Image: © Joseph Calev | | Shutterstock)

The Dead Sea Scrolls may have been written, at least in part, by a sectarian group called the Essenes, according to nearly 200 textiles discovered in caves at Qumran, in the West Bank, where the religious texts had been stored.

Scholars are divided about who authored the Dead Sea Scrolls and how the texts got to Qumran, and so the new finding could help clear up this long-standing mystery.

The research reveals that all the textiles were made of linen, rather than wool, which was the preferred textile used in ancient Israel. Also they lack decoration,  some actually being bleached white, even though fabrics from the period often have vivid colours. Altogether, researchers say these finds suggest that the Essenes, an ancient Jewish sect, "penned" some of the scrolls.

Not everyone agrees with this interpretation. An archaeologist who has excavated at Qumran told LiveScience that the linen could have come from people fleeing the Roman army after the fall of Jerusalem in A.D. 70, and that they are in fact responsible for putting the scrolls into caves.

The Dead Sea Scrolls consist of nearly 900 texts, the first batch of which were discovered by a Bedouin shepherd in 1947. They date from before A.D. 70, and some may go back to as early as the third century B.C. The scrolls contain a wide variety of writings including early copies of the Hebrew Bible, along with hymns, calendars and psalms, among other works. [Gallery of Dead Sea Scrolls]

Nearly 200 textiles were found in the same caves, along with a few examples from Qumran, the archaeological site close to the caves where the scrolls were hidden.

Orit Shamir, curator of organic materials at the Israel Antiquities Authority, and Naama Sukenik, a graduate student at Bar-Ilan University, compared the white-linen textiles found in the11 caves to examples found elsewhere in ancient Israel, publishing their results in the most recent issue of the journal Dead Sea Discoveries.

A breakthrough in studying these remains was made in 2007 when a team of archaeologists was able to ascertain that colorful wool textiles found at a site to the south of Qumran, known as the Christmas Cave, were not related to the inhabitants of the site. This meant that Shamir and Sukenik were able to focus on the 200 textiles found in the Dead Sea Scroll caves and at Qumran itself, knowing that these are the only surviving textiles related to the scrolls.

They discovered that every single one of these textiles was made of linen, even though wool was the most popular fabric at the time in Israel. They also found that most of the textiles would have originally been used as clothing, later being cut apart and re-used for other purposes such as bandages and for packing the scrolls into jars. [Photos of Dead Sea textiles]

Some of the textiles were bleached white and most of them lacked decoration, even though decoration is commonly seen in textiles from other sites in ancient Israel.

According to the researchers the finds suggest that the residents of Qumran dressed simply.

"They wanted to be different than the Roman world," Shamir told LiveScience in a telephone interview. "They were very humble, they didn't want to wear colorful textiles, they wanted to use very simple textiles."

The owners of the clothing likely were not poor, as only one of the textiles had a patch on it."This is very, very, important," Shamir said. "Patching is connected with [the] economic situation of the site."

Shamir pointed out that textiles found at sites where people were under stress, such as at the Cave of Letters, which was used in a revolt against the Romans, were often patched. On the other hand "if the site is in a very good economic situation, if it is a very rich site, the textiles will not be patched," she said. With Qumran, "I think [economically] they were in the middle, but I'm sure they were not poor."

Robert Cargill, a professor at the University of Iowa, has written extensively about Qumran and has developed a virtual model of it. He said that archaeological evidence from the site, including coins and glassware, also suggests the inhabitants were not poor.

Who wrote the Dead Sea Scrolls?

Scholars are divided about who authored the Dead Sea Scrolls and how the texts got to Qumran. Some argue that the scrolls were written at the site itself while others say they were written in Jerusalem or elsewhere in Israel.

Qumran itself was first excavated by Roland de Vaux in the 1950s. He came to the conclusion that the site was inhabited by a religious sect called the Essenes who wrote the scrolls and stored them in caves. Among the finds he made were water pools, which he believed were used for ritual bathing, and multiple inkwells found in a room that became known as the "scriptorium." Based on his excavations, scholars have estimated the population of the site at as high as 200.

More recent archaeological work, conducted by Yitzhak Magen and Yuval Peleg of the Israel Antiquities Authority, suggests that the site could not have supported more than a few dozen people and had nothing to do with the scrolls themselves. They believe that the scrolls were deposited in the caves by refugees fleeing the Roman army after Jerusalem was conquered in A.D. 70.

Magen and Peleg found that the site came into existence around 100 B.C. as a military outpost used by the Hasmoneans, a Jewish kingdom that flourished in the area. After the Romans took over Judaea in 63 B.C. the site was abandoned and eventually was taken over by civilians who used it for pottery production. They found that the pools de Vaux discovered include a fine layer of potters' clay.

There are other ideas as well. Cargill argues that while Qumran started out as a fort it was later occupied by a sectarian group whose members were deeply concerned with ritual purity. "Whether or not they are the Essenes, that's a different question," he said. This group, much smaller than earlier estimates of 200 people, would have written some of the scrolls, while collecting others, he argues.

Other groups, not part of the Qumran community, may also have been putting scrolls into the caves, Cargill said.

Can clothing solve the mystery?

The new clothing research may help to identify the writers of the Dead Sea Scrolls.

Shamir told LiveScience that it is unlikely the scrolls were deposited in the caves by Roman refugees. If that were the case, the more-popular textile in ancient Israel, wool, would have been found in the caves along with other garments.

Peleg, the archaeologist who co-led the recent archaeological work at Qumran, told LiveScience he disagrees with that assessment. He said he stands by the idea that there is no connection between Qumran and the scrolls stored in the caves.

"We must remember that almost all the textiles were found in the caves and not at the site. The main question is the connection between the site and the scrolls," Peleg wrote in an email. "I can find alternative explanations for the fact that scrolls were found with linen."

For instance, linen could have been chosen as scroll wrapping for religious reasons or perhaps priests were responsible for storing the scrolls and they wore linen clothing. "The clothes of the priests were made from linen," Peleg wrote.

In their paper, Shamir and Sukenik say that the clothing found in the Dead Sea Scroll caves is similar to historical descriptions of the clothing of the Essenes, suggesting that they in fact lived at Qumran. They point to an ancient Jewish writer, Flavius Josephus, who wrote that the Essenes "make a point of keeping a dry skin and always being dressed in white." (However, Josephus never said anything about the clothing being made of linen, Peleg points out.)

Josephusalso wrote that the Essenes were very frugal when it came to clothing and shared goods with each other.

"In their dress and deportment they resemble children under rigorous discipline. They do not change their garments or shoes until they are torn to shreds or worn threadbare with age. There is no buying or selling among themselves, but each gives what he has to any in need and receives from him in exchange something useful to himself ..."

In their paper, Shamir and Sukenik also point to another ancient writer, Philo of Alexandria, who wrote that the Essenes wore a common style of simple dress.

"And not only is their table in common but their clothes also. For in winter they have a stock of stout coats ready and in summer cheap vests, so that he who wishes may easily take any garment he likes, since what one has is held to belong to all and conversely what all have one has."

(Translation from the "Selected Writing of Philo of Alexandria," edited by Hans Lewy, 1965.)

Cargill said that the clothing is further evidence that there was a Jewish sectarian group living at Qumran.

"You do have evidence of a group that raised its own animals, pressed its own date honey, that appears to have worn distinctive clothes and made its own pottery, and followed its own calendar, at least a calendar different from the temple priesthood," he said. "Those are all signs of a sectarian group."

He also noted the presence of mikveh (ritual baths) at the site and the fact that the residents could make pottery that was ritually pure.

According to Cargill's theory, the people of Qumran would have written some of the scrolls, while collecting others. "Obviously they didn't write all of the scrolls," Cargill said. Dating indicates some of the scrolls were written before Qumran even existed. One unusual scroll, made of copper, may have been deposited after Qumran was abandoned in A.D. 70.

"[If] not all of the Dead Sea Scrolls are the responsibility of sectarians at Qumran then it would follow that not all of the textiles that are discovered in the caves are [the] product of a sect at Qumran," Cargill said.

Were there women at Qumran?

The new research may also shed light on who created the textiles.

The textiles are of high quality and, based on the archaeological finds at Qumran itself, where there is little evidence of spindle whorls or loom weights, the team thinks it's unlikely they would have been made at the site.

"This is very, very important, because this is connected to gender," Shamir said, "spinning is connected with women."

She explained that the textiles were likely created at another site in Israel, with women playing a key role in their production. This suggests that there were few women living at Qumran itself. "Weaving is connected with men and women, but spinning was only a production of women, [and] we don't find this item at Qumran."