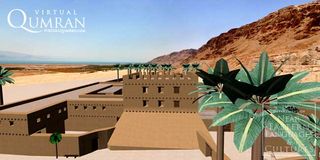 A view of the north side of the reconstructed Khirbet Qumran fortress, facing south towards the Dead Sea.
(Image: © Image by Robert R. Cargill. (c) Copyright 2007 UCLA Qumran Visualization Project)

Fierce warriors once occupied the famous complex where the Dead Sea Scrolls were written, new research suggests. Ruins of the Qumran site—in the present-day West Bank—resemble a monastery, but scholars have argued over its uses before the religious sect who penned the scrolls moved in somewhere between 130 and 100 B.C. Using the world's first virtual 3-D reconstruction of the site, historians recently found evidence of a fortress that was later converted into its more peaceful, pious function. “Once you put all the archaeological evidence into three dimensions, the solution literally jumps out at you,” said William Schniedewind, chair of Ancient Eastern Mediterranean Studies at UCLA and the project’s principle investigator. Clarification in virtual reality The Qumran gained legendary status in the archaeological world when a shepherd boy discovered the Dead Sea Scrolls in nearby caves in 1947. After many investigations of the 20,000-square-foot residential complex where most of the scrolls are believed to have been written, archaeologists have debated the structural mish-mash of its buildings and spaces. Many, such as a defensive four-story tower, don't seem to belong to a setting used exclusively as a monastery. Other areas appeared as add-ons or renovations, such as a communal dining hall. With the 3-D model, the UCLA researchers deconstructed the complex piece by piece. That allowed them to "see" architectural elements invisible to the naked eye, said Schniedewind. "The various sizes of the walls and their ability to support weight (e.g., necessary for multi-story construction/fortification) was not immediately clear in the archaeological plan," he said. “Once we put the dining hall into the model, we realized it had to be an addition,” noted UCLA graduate student and project co-author Bob Cargill. “It only fits to the south of the original structure.” Add-ons like the dining hall were all rooms meant for communal living, while the underbelly of the structure–-built first and revealed in the virtual model–-had more militaristic functions, the researchers found. During its period as a fort, the first extended occupation of Qumran was probably by a band of mighty warriors called the Hasmoneans, whose victory over Greek occupiers is celebrated during Hanukkah, the UCLA historians contend. Monks sought peace in the desert It is widely believed that the Dead Sea Scrolls, the only surviving texts of the Hebrew Bible (or Old Testament) written before 100 A.D., were rushed from the Qumran compound and hidden in the caves during an encroachment of Roman troops in 66 A.D. Before the attack, the Qumran was a peaceful place of worship where the Essenes, a strict religious group who moved there from Jerusalem, painstakingly copied and scribed the scrolls. "The site was chosen because the wilderness was a place that people went to seek God--indeed, this was the reason that the Dead Sea Scrolls give for choosing a desert site for this settlement," Schniedewind told LiveScience. Essene monks observed a regimented life of ritual while they lived at the Qumran. The new findings support the theory that the building had at least a few occupants prior to the Essenes, among them—some historians have suggested—an aristocratic family from Jerusalem who used the building as a vacation home. It makes sense, said Schniedewind, given the limit of practical places to live in that part of the world. "There are very few possible places that could be settled in the Judean desert. So, everyone who settles there tends to choose the same places," Schniedewind said. "Specifically, there are very few viable water sources. The site of Qumran … allowed the collection of runoff using dams, aqueducts and pools."