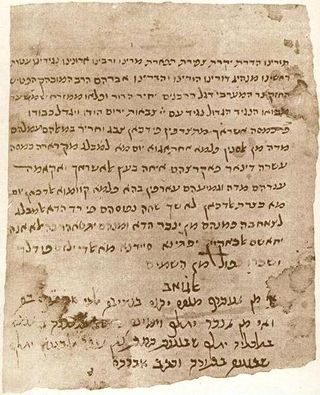 A scroll fragment from the Cairo Genizah, a trove of hundreds of years worth of records, letters and lists found in a synagogue in Cairo.
(Image: © American Friends of Tel Aviv University (AFTAU))

It's like something out of "The Da Vinci Code": Hundreds of thousands of fragments from medieval religious scrolls are scattered across the globe. How will scholars put them back together?

The answer, according to scientists at Tel Aviv University, is to use computer software based on facial recognition technology. But instead of recognizing faces, this software recognizes fragments thought to be part of the same work. Then, the program virtually "glues" the pieces back together.

This enables researchers to digitally join a collection of more than 200,000 fragmentary Jewish texts, called the Cairo Genizah, found in the late 1800s in the Ben Ezra Synagogue in Cairo. The Cairo Genizah texts date from the ninth to the 19th centuries, and they're dispersed amongst more than 70 libraries worldwide. Researchers will report on their progress in digitally reuniting the Cairo Genizah during the second week in November at the 2011 IEEE International Conference on Computer Vision in Barcelona.

Genizahs are storerooms for holy texts, which under Jewish law cannot be simply tossed in the garbage when they're worn out. The Cairo Genizah, however, also contains merchants' lists, divorce documents and even personal letters, a firsthand look at hundreds of years of history in the Middle East.

A non-profit organization, the Friedberg Genizah Project, is working to digitize the fragments of the Cairo Genizah. Meanwhile, Tel Aviv University computer scientists Lior Wolf and Nachum Dershowitz have the difficult task of joining the fragments into a continuous whole.

To do so, they developed a computer program that analyzes document handwriting, physical properties of the page, and even spacing between the lines of writing.

"Its big advantage is that it doesn't tire after examining thousands of fragments," Wolf said in a statement. The program has made 1,000 confirmed connections between fragments of the Cairo Genizah in the span of a few months, almost the same amount made in 100 years of human scholarship.

The researchers are now applying the same technology to fragments of the Dead Sea Scrolls, a collection of hundreds of text found along the Dead Sea in the 1950s.

"It's a more complicated challenge," Wolf said, referring to the Dead Sea Scrolls. "The fragments are for the most part much smaller, and many of the texts are very unique. These texts shed light on the beginnings of Christianity."

Wolf and Dershowitz's effort is part of a Google project using high-resolution photographs of the Dead Sea Scrolls in order to put these biblical texts online.