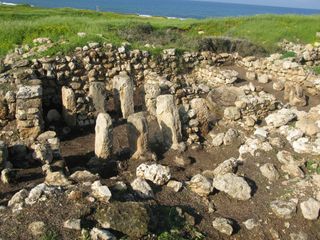 A well preserved four-room house from the period of the Kingdom of Israel has been uncovered at Tel Shikmona, Israel.
(Image: © Shay Bar | University of Haifa)

The remains of a house uncovered in the city of Haifa are the best-preserved yet from the Kingdom of Israel, dating back nearly three millennia.

The site of the discovery was excavated about 40 years ago, but neglect had left the structure hidden until now. Layers of earth and garbage had piled up atop it, and off-road vehicles had plowed over the area, damaging the artifacts.

When archaeologists recently re-exposed the area during a dig, they found the four-room home to be remarkably good shape — the best-preserved house from the period of the Kingdom of Israel found so far, the researchers said today (July 6). The dig is in an area called Tel Shikmona.

"We had seen the structure in the old photographs and were sorry that such a rarely preserved finding had disappeared due to neglect. We were not even sure that we would be able to find it again. It was practically a miracle that we managed to locate and uncover it and that it is still so well-preserved," said the leaders of the excavation team, Shay Bar and Michael Eisenberg of the Zinman Institute of Archaeology at the University of Haifa.

The dig also unearthed remains of a Persian city from about 2,400 years ago and a Byzantine town from approximately 1,500 years ago.