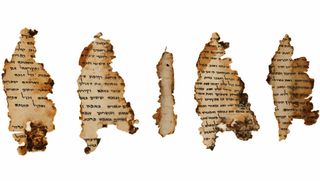 The Temple Scroll consists of 18 sheets of parchment, each of which has three or four columns of text; the lengthy scroll, spanning 26.74 feet (8.15 meters) and considered the largest scroll ever discovered in the Qumran caves, is now digitized online with English translations.
(Image: © Israel Museum)

The oldest known biblical manuscripts in existence, the Dead Sea Scrolls, are now online to everyone in the world with the aid of the Israel Museum in Jerusalem and Google.

The Dead Sea Scrolls were written between the first and third centuries B.C. They were hidden in 11 caves in the Judean desert on the shores of the Dead Sea in 68 B.C. to protect them from approaching Roman armies. They were not unearthed again until 1947, when a Bedouin shepherd of the Ta'amra tribe threw a rock in a cave and realized something lay inside.

Since 1965, the scrolls have been on exhibit at the Israel Museum. They have offered critical insights into life and religion in ancient Jerusalem, including the birth of Christianity.

"They are of paramount importance among the touchstones of monotheistic world heritage," said James Snyder, director of the Israel Museum.

Nearly all the books of the Hebrew Bible are present, with the exception of Nehemiah and Esther. Copies of works that are not part of the biblical canon were discovered as well — some of these had previously been known only in ancient translations, such as Tobit, Jubilees, and 1 Enoch, while others were completely new to researchers, such as the Genesis Apocryphon or the Temple Scroll. [Gallery of Dead Sea Scrolls]

"They are really foundation stones to modern Western thought in the Judeo-Christian world in the same way that the 'Mona Lisa' was to development of art," Snyder told LiveScience. "If you think of certain phrases that we all know, such as 'turning swords to plowshares,' meaning 'to not go to war anymore,' that comes from the Book of Isaiah, which we have in the Dead Sea Scrolls." [Science as Art: A Gallery]

Now, as the new year approaches on the Hebrew calendar, anyone can view, read and interact with five digitized Dead Sea Scrolls, the most complete of the eight the Israel Museum has in its collection. These five include the Great Isaiah Scroll, the only complete ancient copy of any biblical book in existence, and the Temple Scroll, the thinnest parchment scroll ever found among the Dead Sea Scrolls. Snyder noted the museum has also digitized the other three scrolls, and is now working on making them available in an easily readable form.

"What we've just done with Google is to bring these treasures to as broad an audience worldwide as might possible be interested in tapping into them," Snyder said.

The project involves ultra-high-resolution photographs that include up to 1,200 megapixels in detail, nearly 200 times more than the average consumer digital camera. As such, viewers can see even the most minute features of the material they are written on. Readers can also click on the text and get an English translation, and leave a comment for others to see.

"All this was accomplished in just six months," Snyder said.

Google helped design the online experience for the scrolls. Their text is discoverable via Web search — hunting for phrases from the scrolls may surface in search results. For example, a search for "Dead Sea Scrolls 'In the day of thy planting thou didst make it to grow'" may reveal a link to Chapter 17: Verse 11 within the Great Isaiah Scroll.

"We hope one day to make all existing knowledge in historical archives and collections available to all, including putting additional Dead Sea Scroll documents online," said Yossi Matias, managing director of Google's research and development center in Israel.