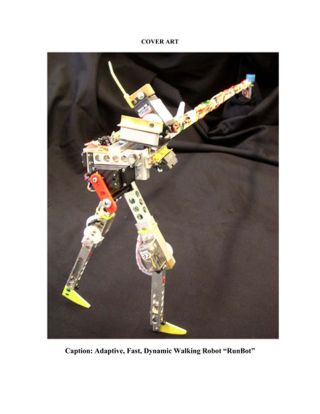 The Runbot can successfully walk up slopes, which could lead to improved bionics for humans.
(Image: © Florentin WÃƒÂ¶rgÃƒÂ¶tter et al.)

The first climber to ascend the highest mountain in the solar system might be a robot rather than a human.

The humble origins of such a mechanical pioneer? A robot that stumbles around a lot before it nimbly stalks the slopes.

Before any mountaineering robots ever head off to space, they might help lead to better prosthetics for humans on Earth, scientists say.

Walking is an extraordinarily complex task that most humans master, but robots still struggle with it. Rugged terrain makes walking even more difficult, but kids, hikers and others naturally learn how to adapt their gait to changes such as going uphill and downhill or traversing icy and sandy ground.

Researchers have now simulated the principles underlying this adaptability and plugged them into the "Runbot." This machine is the fastest robot on two legs for its size, walking up to 3.5 leg-lengths per second with legs 9 inches long. (The Olympic speed record for human walking is 4 to 5 leg-lengths per second.) Unlike Honda's walking robot ASIMO, RunBot is a "dynamic walker," which means it does not calculate exactly where it will go in advance, saving on the amount of computer power needed.

With its infrared eye, RunBot can detect a slope on its path. On its first ascent up a slope, RunBot typically falls over backwards, as it has not yet learned to react to what it sees with a change in gait.

Computational neuroscientist Florentin Wörgötter at the University of Göttingen recalled hearing RunBot falling over and over again in his student Tao Geng's lab, as the song "Greensleeves" played "from some MP3 file on endless repeat. I still remember my frustration when I always heard 'thump thump thump, crash,' intermixed with the soothing sounds of this song."

But just like children, RunBot learns from failure. The machine successfully handles slopes after a few tries, adjusting its gait on the spot. Just as a human, it leans forwards slightly and uses shorter steps. The steeper the slope, the more RunBot will adapt its gait, findings Wörgötter and his colleagues detailed July 13 in the journal PLoS Computational Biology.

Wörgötter said he was sure robots could scale Earth's tallest mountains one day, even Everest, "but it might take another 20 years." However, Wörgötter did not expect such a mountaineering robot to be a biped like humans. To climb the highest mountain in the solar system—Olympus Mons on Mars, which is approximately 88,500 feet high—he said a six-legged insectoid "would be much better."

The researchers have started to work on potential applications for their research on human prosthetics with bionics company Otto Bock Healthcare in Duderstadt, Germany.

"Current prosthetic devices are usually passive, but this will change in the future, and then one needs efficient adaptive control methods," Wörgötter explained.

The question then becomes, "Can we scale this up to the size of a human?" Wörgötter said. "The answer to this question is not trivial. Just scaling this up will lead to different properties and maybe then we are back to square one."