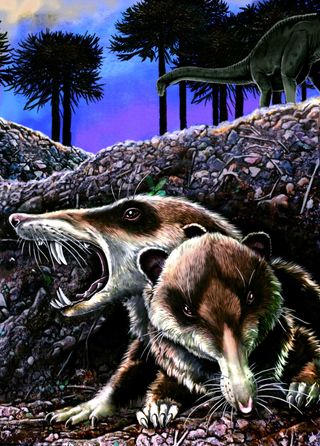 An illustration of the saber-toothed squirrel-like mammal known as Cronopio dentiacutus reveals the creature's striking resemblance to Scrat in the film "Ice Age."
(Image: © Jorge Gonzalez.)

A saber-toothed squirrel-like mammal from the Age of Dinosaurs is shedding light on just how diverse our distant ancestors might have been, researchers said.

This newfound creature is named Cronopio dentiacutus — Cronopio after the bizarre, fictional beasts central to many stories by Argentine writer Julio Cortázar, and dentiacutus from Latin, meaning "sharp, acute teeth."

The animal's fangs would've been about 0.2 inches (5 millimeters) long, about one-fifth the length of its head.

"It looks somewhat like Scrat, the saber-toothed squirrel from 'Ice Age,'" said researcher Guillermo Rougier, an anatomist and vertebrate paleontologist at the University of Louisville in Kentucky. "The comparison with Scrat is superficial, but it just goes to show how diverse ancient mammals are, that we can just imagine some bizarre critter and later find something just like it."

It remains uncertain what Cronopio might have used its oversized fangs for, but long canine teeth in mammals nowadays are found mostly in insect-eaters.

"Modern-day insectivores use long canines mostly to just grab and hold prey," Rougier said. "Still, we don't have living parallels with any canines quite as long as seen in Cronopio — it's just beyond the scales we know."

The scientists discovered the previously unknown 100-million-year-old species in a very arid, remote part of southwestern Argentina, which has yielded abundant skeletons of dinosaurs and small vertebrates in the past.

"It looks like another planet," Rougier said of the site in Argentina. "The white bones are quite visible against the bright red sandstone we find here."

In contrast, when Cronopio was alive, "the area was a river floodplain with numerous other animals, including large carnivorous dinosaurs, large herbivores, terrestrial crocodiles, turtles, lizardlike sphenodontians and snakes," Rougier said. "We do not know much about the flora, but there were at least some tall conifers."

"The area had periodic floods," he added. "This is probably what originally buried the animals."

Rougier suggested Cronopio was likely prey for crocodiles and carnivorous dinosaurs. In turn, it probably ate insects, grubs, other kinds of invertebrates and perhaps some small vertebrates.

"Cronopio's skull was not designed to support large forces, so it could not use its saber-teeth to wrestle down prey like lions can with their canines," Rougier observed.

The mammals that lived in South America during the Age of Dinosaurs remain largely a mystery. Until now, researchers had only found one mammal skull in South America that dated back to the Age of Dinosaurs, a 130-million-year-old creature the size of a small opossum named Vincelestes neuquenianus. Cronopio is now the only other mammal known from this time, helping fill in an enigmatic 60-million-year gap in the continent's prehistory of mammals.

"The amount of information we have about mammals that lived during this time in South America is extremely meager — the new finds represent by far the best specimens known from that time and place," Rougier told LiveScience.

Cronopio belonged to a group of primitive, extinct beasts known as dryolestoids, which once were part of the lineage leading to marsupials and mammals with placentas such as humans. Dryolestoid remains have been found before, mainly in the northern continents — this new discovery, which is significantly different from past findings, reveals this group of animals reached unsuspected levels of variety. [Marsupial Gallery: A Pouchful of Cute]

The scientists have found two partial skulls and jaws so far. The first specimen, unearthed in 2002, was discovered by the expedition's mechanic. These fossils present the first time scientists could reconstruct the whole shape of a dryolestoid skull — they have features previously seen in primitive mammals that paved the way for the evolution of marsupials and placentals, such as the development of certain key networks of blood vessels.

"Now we have a mammal as a starting point for further study of the lineage of all mammals, humans included," Rougier said.

The scientists detailed their findings in the Nov. 3 issue of the journal Nature.