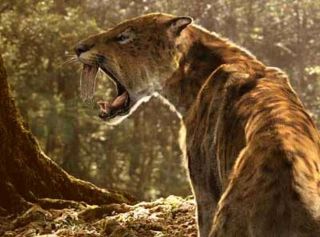 The sabertooth cat may have been less aggressive than its feline cousin, the American lion, a new study says.
(Image: © National Park Service)

Saber-toothed cats might be most famous for their oversized fangs, but scientists now find the feisty felines had another exceptional feature — powerful arms stronger than those of any cat alive today.

Commonly known as the "saber-toothed tiger," the extinct cat Smilodon fatalis roamed the Americas until roughly 10,000 years ago, preying on "megafauna" — large animals such as mammoths, bison, camels and mastodons. Their specialization on such giant creatures might have doomed these hunters when their Ice Age prey died off. [The World's Biggest Beasts]

The most recognizable features of the saber-toothed cat — giant, dagger-like canines — were also perhaps its most puzzling. The fangs would have been excellent at inflicting deadly slashing bites to its prey's throat, but their size and shape would also have made them highly vulnerable to fracturing compared with modern cats. That led researchers to wonder how the fangs developed in the first place.

"Cats living today have canines that are round in cross-section, so they can withstand forces in all directions," said researcher Julie Meachen-Samuels, a paleontologist at the National Evolutionary Synthesis Center in Durham, N.C. "If the prey is struggling it doesn't matter which way it's pulling — their teeth are unlikely to break."

In contrast, the long canines of saber-toothed cats were oval in cross-section, or thinner side-to-side, making them relatively fragile. This suggested that saber-toothed cats must have killed prey differently from other cats. In fact, research published in 2007 suggested Smilodon had a wimpy bite.

That's where the powerful arms come in. These predators might have pinned victims down with their heavily muscled forelimbs to protect their teeth from fracturing as they bit struggling prey, Meachen-Samuels said.

In an arm-wrestling match of sorts, the researchers compared saber-tooth arms with those of other cats. To do so, they X-rayed the arm and leg bones of fossils recovered from the La Brea Tar Pits in Los Angeles. They also analyzed the limb bones of 28 cat species living today — ranging in size from the 6-pound (2.7-kilogram) margay to the 600-pound (272-kg) tiger — as well as the extinct American lion, the largest cat with conical teeth that ever lived. These measurements helped the researchers estimate bone length, rigidity and strength for each species.

Species with longer limbs generally had stronger bones. However, while saber-tooth leg bones fell within the normal range, their arm bones were exceptionally thick for their length. Not only that, their arms also had thicker cortical bone — the dense outer layer that makes bones strong and stiff.

"When I looked at Smilodon, I knew they were thicker on the outside than other cats, but I was really shocked at how much thicker they were on the inside as well," Meachen-Samuels told Live Science.

The thicker cortical bone seen with the saber-toothed cats makes sense if the arms were under greater stress than normally expected for cats their size, Meachen-Samuels explained. Just as lifting weights improves bone density over time, so too may the repeated strain of grappling with prey have resulted in thicker and stronger arm bones in saber-toothed cats.

"As muscles pull on bones, bones respond by getting stronger," Meachen-Samuels said. "Because saber-toothed cats had thicker arm bones, we think they must have used their forelimbs more than other cats did."

Meachen-Samuels and her colleague Blaire Van Valkenburgh detailed their findings online July 2 in PLoS ONE.