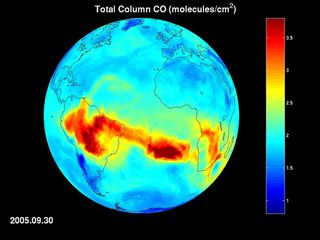 Forget auto emissions and power plants. Humans may have contributed to climate change more than 10,000 years ago, according to a new study.

The research, which combined fossil data with climate modeling, revealed that the extinction of woolly mammoths — driven in part by human hunting — may have caused changes in vegetation that, in turn, warmed Siberia and neighboring Beringia by about 0.3 to 0.4 degrees Fahrenheit (0.15 to 0.2 degrees Celsius).

"Some people say that people are unable to affect the climate, that it's just too big," said Christopher Doughty, a post-doctoral researcher at the Carnegie Institution for Science in Stanford, Calif., and a co-author of the study. "That's obviously not the case. People started to affect global climate much earlier than we thought."

Most researchers peg the beginning of human-caused climate change to about 8,000 years ago, when mankind discovered agriculture. But as the Pleistocene era drew to a close 10,000 to 15,000 years ago, megafauna like mammoths and saber-toothed cats began to go extinct. Some of the die-off was driven by a warming climate, but an unknown portion was likely due to overhunting by humans.

A 2009 study found that after the mammoths died, their former habitat began to change. Small trees, once kept in check by hungry or destructive mammoths, replaced grasslands. Because the trees were darker than the grasslands, they absorbed higher rates of solar energy, continuing the cycle of warming.

But the mammoth extinction isn't the only explanation for the proliferation of trees. Warmer weather might also have allowed the trees more of a foothold.

To tease out the respective contributions of mammoths and warming, Doughty and his colleagues drew on data on the impact of modern elephants on their habitats and on fossil records of birch pollen in Siberia and Beringia. They found that the land surface covered by birch trees increased 26 percent over an average of 850 years after mammoths began to die out. Using modern elephant data, the researchers estimated that the loss of mammoths was responsible for 23 percent of this increase, with climate change making up the rest.

By combining climate simulation data with the vegetation loss findings, Doughty and his team were able to estimate that the extinction of mammoths contributed 0.4 degrees F (0.2 degrees C) to the nearly 1 degree F (0.54 degrees C) of warming during this time period.

Researchers aren't sure exactly why mammoths went extinct or how much humans are to blame. But given that hunting likely played a role, Doughty said, the study suggests even small populations of humans can cause significant environmental change.

The study will published in the journal Geophysical Research Letters.