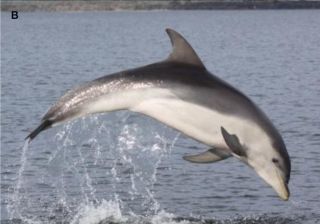 An example of the new dolphin species. Isolated off the coast of Australia, it may already be in danger.
(Image: © Charlton-Robb, et. al. PLoS ONE, 2011.)

A dolphin that was previously lumped in with other species of coastal-dwelling dolphins is actually its own Australian species, researchers say. And already, the new Burrunan dolphin may be in danger due to its small population and limited range.

The dolphins were previously grouped in with other coastal dolphins within the genus Tursiops: T. trucatus (common bottlenose dolphin),T. aduncus (Indo-Pacific bottlenose dolphin) or T. maugeanus. These new species of dolphin live off the coast of southern and southeastern Australia (near Victoria). [Deep Divers: A Gallery of Dolphins]

The researchers, led by Stephen McKechie at Monash University, in Victoria, Australia, wrote online Sept. 14 in the journal PLoS ONE that their findings "strongly indicate that these coastal dolphins are not simply ecotypes [a distinct race within a species] of either recognized Tursiops species, but are in fact representative of a new species."

The results suggest T. maugeanus is two species, a "southern" form of the bottlenose dolphin (and so not its own species), and the new species, named T. australis. The T. maugeanus name has been officially retired as a species. The new species has been given the aboriginal name, the Burrunan dolphin, which in the Boonwurrung, Woiwurrung and Taungurung languages means "large sea fish of the porpoise kind."

The researchers determined the dolphins were a different species when they tested their DNA. It showed a deep evolutionary divergence between this new dolphin and the two other Tursiops species in the region. Because molecular evidence alone isn't enough to determine a new species, they also looked at the dolphins' physical characteristics, to see if there were any visible signs that these animals should be segregated into their own species.

They discovered that the new species has unique characteristics not found in any of its sibling species. The Burrunan dolphin is smaller than the traditional bottlenose, reaching about 8 feet (2.5 meters) long, but longer than the Indo-Pacific bottlenose. There are also differences in the size and shape of its skull and in its dorsal fin and its snout.

It is a dark bluish-gray near the fin on its back, a color that extends over its head and sides of its body. Their sides are gray and their underbelly is lighter in color, an off-white, covering up to their eyes and flippers.

The new species of dolphins only live in a tiny region off southern and southeastern Australia, with  two small populations making up the entire species (about 150 individuals). The other, more common dolphins in the area are well represented across the globe. [10 Species You Can Kiss Goodbye]

This region is located close to many urban and agricultural centers, the runoff of which ends up in the dolphin's habitat.

"The formal recognition of this new species is of great importance to correctly manage and protect this species," the authors write. Especially because of the population's proximity "to major shipping ports, commercial and recreation fisheries, residential, industrial and agricultural stressors."

The authors believe the species should qualify for protection under the Environmental Protection and Biodiversity Conservation Act.