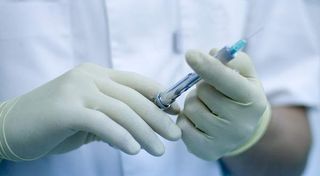 Pity our neighbors to the north. A change in the U.S. flu shot policy for preschoolers has led to a 34 percent decline in flu cases for children ages 2 to 4 compared with their Canadian counterparts, according to researchers at Children's Hospital Boston and McGill University in Montreal.

The flu rates in the two countries had mirrored each other for years, the researchers found, but rates improved dramatically in the United States starting in 2006, the year that the U.S.-based Advisory Committee on Immunization Practices recommended flu shots for tots.

The new U.S. flu policy had far-reaching effects in other age groups, too, likely because toddlers are germ mops, and keeping them flu-free spares the rest of the family from contracting influenza. The study was published today (Sept.19) in the Canadian Medical Association Journal.

The researchers limited their study to Boston and Montreal, two cities that share similar demographics and flu patterns during the unmercifully cold winter. They compared data from over 100,000 visits to Children's Hospital Boston and Montreal Children's Hospital from 2000 to 2009. This period included years when the U.S. and Canadian flu vaccination policies for 2- to 4-year-olds were aligned and the years when they differed.

The change in flu policy is the only logical explanation for the dramatic decline in U.S. flu cases compared with Canada, the researchers said. Everything else, including the viral strains, was essentially identical in the two cities.

The researchers had no data on vaccination rates in the older age groups, but they could determine that the U.S. flu rate dropped by 11 to 18 percent in other age groups, a result of "herd immunity."

Aside from sparing kids and parents the misery of illness, flu prevention saves money. A study published in the journal Vaccine in July 2010, focusing just on flu rates among children under age 5, found that the economic burden in terms of hospitalization of kids and lost work among parents was more than $100 million a year. A study in June 2007, also published in Vaccine, estimated that a bad flu year costs the U.S. economy tens of billions of dollars in deaths, hospitalizations, lost wages and lower productivity.

Nevertheless, the 2006 U.S. policy change was controversial, given the skepticism some parents maintain about the number of vaccines children receive. Many still believe that the measles-mumps-rubella (MMR) vaccine is linked to autism, despite the fact that the only study making such a claim has since been retracted because its data were fudged. More recently, Republican presidential candidate Michele Bachmann linked the human papillomavirus (HPV) vaccine to mental retardation, despite no evidence of this. HPV is the primary cause of cervical cancer. [5 Dangerous Vaccination Myths]

The United States generally has better childhood immunization rates compared with Canada, according to data from the WHO and UNICEF. But that could change if the citizens and the leaders aren't behind the shots.