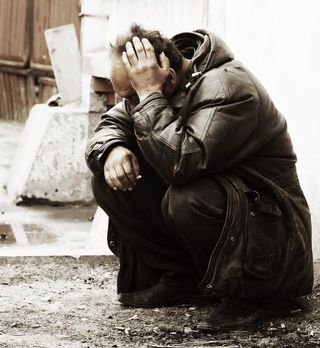 A homeless man sits on the street.
(Image: © Wrangler, Shutterstock)

New Census data suggests that even after the U.S. officially exited the recession in June 2009, the population continued to feel the echoes of economic trouble.

Social scientists have found a multitude of effects from the recession that started in December 2007 and continued through 2009. A May 2011 survey about personal finance found that more than a third of Americans felt their financial situation was getting worse, not better. Even pets are suffering, according to an April 2011 survey of veterinarians, which reported an increase in fleas, ticks, heartworm and other preventable conditions as pet owners try to save money by skipping the vet.

The new numbers are part of the Census report "Income, Poverty and Health Insurance Coverage in the United States: 2010." Since 2007, the Census Bureau found, real median household income has declined 6.4 percent. The decline was significant in white and black households, and in areas of the country outside the Northeast.