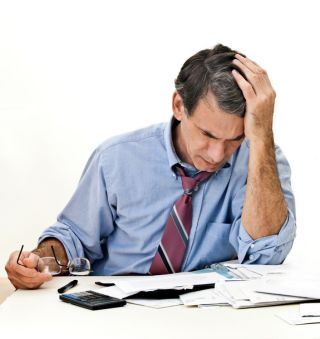 Americans are feeling more negative about their personal finances than they have in four decades.
(Image: © Barbara Reddoch | Dreamstime.com)

Americans are feeling more negative about their personal finances than they have in four decades, with many saying the situation has gotten worse rather than better, according to a new study.

Conducted by NORC at the University of Chicago, the General Social Survey reported last month that 37.4 percent of Americans felt their financial situation got worse over the last several years, compared with 28.3 percent who thought so in 2008 and 15.7 percent in 2000.

In addition, for the first time since 1972, the portion of Americans saying that they are "not at all" satisfied with their financial situation, 31.5 percent, notably exceeded the share who said they are "pretty well" satisfied, 23.4 percent.

“People have felt this recession more severely than past recessions,” said Tom Smith, director of the General Social Survey. “This one has had the biggest self-assessment and psychological impact.” [Unemployment Fuels Loss of Identity]

Smith believes the downfall of such iconic financial institutions as Fannie Mae and Freddie Mac has led to Americans’ overall dissatisfaction with their own financial situation.

“That shook the faith of a lot of people,” Smith told LiveScience. “The negativity was greater, in part, because it was an assessment of weak financial institutions and the economy in general.”

Insecurity regarding employment was also a factor.

With such negative feelings surroundings finances, Smith said it wasn’t surprising that the survey also indicted overall happiness is on the decline.

“You can relate that directly to the economic downturn,” Smith said.

What you can do

Steven Thalheimer, a Silver Springs, Md., financial planner, said not fully understanding one’s financial status – or having some confusion over future goals and how to achieve them – is contributing to Americans’ overall negative outlook.

“I think a lot of what people are feeling is unease, because they don’t know where they are in terms of their financial standing and security,” Thalheimer said.

He recommended taking stock of your assets and liabilities and setting long-term financial expectations regarding things like retirement, housing and college funds.

“Get it all down on paper,” he said. “Then you can attach real numbers to those goals and start to prioritize.”

Thalheimer said this would offer a clear understanding of what it will take to achieve down-the-road goals.

“People really haven’t thought about, in concrete terms, what it will take to achieve their goals and are they doing enough to achieve them,” he said.

The General Social Survey is a biennial survey by NORC (the National Opinion Research Center) that gathers data on contemporary American society in order to monitor and explain trends and constants in attitudes, behaviors, and attributes. The survey employs a sample of 2,044 interviews.